War in Darfur
Commentators square off on the “truths about Darfur.”

The peoples of Darfur are being subjected to the most vicious types of attacks and experiencing the most intensive suffering. Nevertheless, the reporting of events in the Darfur region of Sudan resembles the reporting of events in the previous Kosovo region of Yugoslavia. In both cases, the central governments are blamed for everything and the rebellious groups, the civil war, the resulting banditry and their contributions to the troubles are downplayed. Resolution of the Darfur problems seems destined to be a replay of Kosovo and Bosnia; breakup of a nation and emergence of failed states.

The presentation of the Darfur situation is controversial:

These controversies are highlighted in reports:

China is now underwriting its second genocide in three decades. The first was in Pol Pot’s Cambodia and the second is in Darfur, Sudan. Chinese oil purchases have financed Sudan’s pillage of Darfur, Chinese-made AK-47’s have been the main weapons used to slaughter several hundred thousand people in Darfur so far, and China has protected Sudan in the Security Council.

(1) China supported Prince Sihanouk and not any Pol Pot genocide.
(2) Is it believable that one weapon, an AK-47, which can be bought on the world market from any nation, can be responsible for the violence?
(3) China might not support sanctions against Darfur, but the People’s Republic has not vetoed or derailed any Security Council decisions concerning Sudan and Darfur.
(4) How can Sudan pillage Darfur, when Darfur is part of Sudan?
(5) As the following chart shows, China is only one of several nations with oil concessions in Sudan. 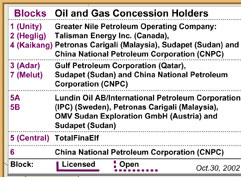 Other observers perceive the conflict as sectarian rivalry.

The International Commission of Inquiry on Darfur to the United Nations Secretary-General, 25 Feb 2005, reports:

Based on a thorough analysis of the information gathered in the course of its investigations, the Commission established that the Government of the Sudan and the Janjaweed are responsible for serious violations of international human rights and humanitarian law amounting to crimes under international law. In particular, the Commission found that Government forces and militias conducted indiscriminate attacks, including killing of civilians, torture, enforced disappearances, destruction of villages, rape and other forms of sexual violence, pillaging and forced displacement, throughout Darfur. These acts were conducted on a widespread and systematic basis, and therefore may amount to crimes against humanity.

The conflict is rooted in decades of civil strife and competition for resources between Arabs and non-Arabs in the regime who share the Muslim faith, he said. In February 2003, African tribes took up arms against the central Sudanese government, which responded with scores of killings.

The Junjaweed, extremists in Arabist ideology, rape to reap more Arabs from the “primitive black tribes”—“to appropriate what is justly theirs” said Menon.(Rajan Menon, International Relations professor,) This creates another class of people but most importantly—it is tearing apart the social fabric of society.

There are contradictory impressions:

Truth 1: Nearly everyone is Muslim. Mathina Mydin, A Malaysian nurse said: “…I quickly realized this war had nothing to do with religion.”
Truth 2: Everyone is black. The true division in Darfur is between ethnic groups, split between herders and farmers. Each tribe gives itself the label of “African” or “Arab” based on what language its members speak and whether they work the soil or herd livestock. Also if they attain a certain level of wealth, they call themselves Arab.
Truth 3: It’s all about politics. “Darfur is simply the battlefield for a power struggle over Khartoum.” said Ghazi Suleiman, a Sudanese human rights lawyer.
Truth 4: This conflict is international. China and Chad have played key roles in the Darfur conflict.
Truth 5: The “genocide” label made it worse. Rather than spurring greater international action, that label only seems to have strengthened Sudan’s rebels; they believe they don’t need to negotiate with the government and think they will have U.S. support when they commit attacks.

Atrocities have been committed by all sides; banditry and warlordism is widespread. Darfur has been consumed by a brutal conflict, but it is not genocide — the US’ stated motive in acting. Khartoum is accused of arming Arab militiamen — the Janjaweed — to wipe out non-Arabs. The war’s complex origins are tribal and political, but not racial. Darfur’s Arabs are black, indigenous African Muslims — just like Darfur’s non-Arabs.

Others believe in a pretext for intervention.
Mohammad Jamal Arafa, Egyptian researcher and political analyst , interviewed by Tharwa Correspondent Wahid Taja, June 20, 2004.
Note: The Tharwa Project is an independent initiative that provides discussion and dissemination of ideas that can contribute to raising civic awareness in the Broader Middle East and North Africa Region.

One can say that the issue of Darfur is gradually changing into a pretext for intervention in the Sudan, militarily this time, and for dividing that country in the long term. The South might separate with about a quarter of Sudan’s area at the end of the six-year transient stage. Then the west of Sudan (Darfur) might follow with an area of 510 thousand square kilometers and six millions of inhabitants under pretext that there is a racial cleansing calling for an international intervention. Finally, the East of Sudan may also follow as a result of Eritrean and Ethiopian efforts to secure loyal Sudanese factions in the boarder zones, in an attempt to encourage the region to demand separation.

The International Commission of Inquiry on Darfur to the United Nations Secretary-General, 25 Feb 2005, also reported:

While the Commission did not find a systematic or a widespread pattern to these violations, it found credible evidence that rebel forces, namely members of the SLA and JEM, also are responsible for serious violations of international human rights and humanitarian law which may amount to war crimes. In particular, these violations include cases of murder of civilians and pillage;

and the same UN commission contradicted the use of the word genocide.

The Commission concluded that the Government of the Sudan has not pursued a policy of genocide.

On April 30, 2006,the Sudan government accepted the proposed peace agreement but the rebels refused it.

ABUJA, Nigeria — Sudan’s government said yesterday it was ready to sign a peace agreement to end bloodshed in the Darfur region. However, rebels expressed reservations and pressed for an extension to talks hours before an African Union deadline.

ADDIS ABABA, Ethiopia, March 11 — The African Union decided Friday to extend its peacekeeping mission in the Darfur region of western Sudan for six months to give itself time to negotiate a peace agreement, but it promised to transfer control to the United Nations after that was accomplished.

Unless rebel attacks against United Nations and other relief operations in a northern sector of Sudan’s strife-torn Darfur region stop immediately, the world organization will be forced to suspend all assistance to 450,000 vulnerable people living in the area until safety can be assured, a top UN official warned today.

Defining the strife in Darfur as Arab against non-Arab is contrived and suspicious.
In civil wars, central governments attack rebel positions and populations and don’t attack those loyal to the regime. For this reason, intervention must be careful it is not guided by the agenda of external forces which often use the tragedies in a conflict for geopolitical advantage. Conflicts that require humanitarian attention are occurring in many parts of the world: Burma, Sri Lanka, Palestine, Uganda, Somalia are examples. Why have the National Association of Evangelicals, the proselytizing group Sudan Sunrise, Congressman Tom Lantos (D-USrael) and several pro-Israeli groups made Darfur their special cause, filling lawns with Save Darfur slogans and prompting U.S. high school and college campuses to become active in the Save Darfur movement? Why have political organizations, such as Move On, which protest against U.S. involvement in Iraq and Iran petitioned the U.S. to become involved in Darfur? From the one-sided reports and provocative requests, it is evident that several organizations that talk about saving the Darfur people actually want only to topple the Khartoum government, dismember Sudan and create more instability and havoc in an oil rich Arab nation hostile to USrael interests.

Darfur cannot be saved unless institutions win trust of all combatants and propose solutions that recognize the legitimate rights of the Darfur people and guarantee the territorial integrity of Sudan, regardless of opinions of the Sudanese government.  source