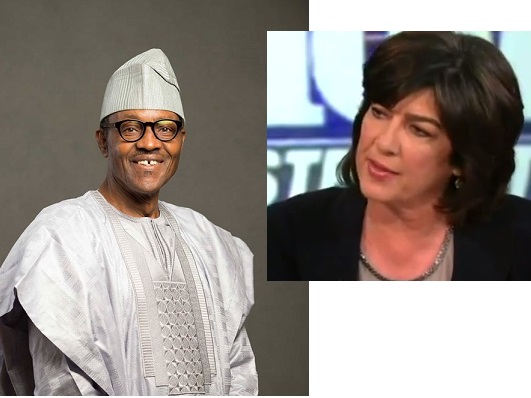 Last night APC presidential candidate, Gen. Muhammadu Buhari (rtd.) was on Christiane Amanpour’s CNN show about the time President Goodluck Jonathan was having a chat with
journalists at a special media meeting in Abuja.

Buhari spoke about the ongoing political situation, his thoughts about Obasanjo’s endorsement and how he’ll fight corruption and Boko Haram if he
becomes president.

Here’s a full transcript of the interview:

Amanpour: General, welcome to the programme.
Can I ask you first your reaction to the delay in this election by six weeks and to what you just heard President Jonathan say that they will make
inroads into much more security within the next six weeks?

Buhari: Well, my reaction is that of disappointment, because the presentation made by INEC was that
they were ready to conduct the election on the date they fixed a year ago, and for them to be forced virtually by the military that they cannot
guarantee the safety of their workers, they have to concede to the demand of the military [for an] additional six weeks.
Now since those six weeks are within the constitutional time allowed, this was why we came and asked our supporters to remain calm and
resolute and obey the laws.

Amanpour: Okay General, let me ask you because you’re a former military general: You were ruling the country briefly. Why is it that the Nigerian
military today cannot take on Boko Haram and have failed to combat that terrorist organisation?

Buhari: Well this has been made much more clear when the National Assembly attempted to conduct
a hearing after the soldiers were giving interviews to foreign media about being sent to the front without proper weapons. The National Assembly
attempted to conduct a hearing by getting the budgets approved by the National Assembly over the last three years and inviting the service chiefs
to come and tell them [why the] weapons were not procured and sent to the soldiers — and competent leadership. And that hearing was scuttled.
So in short, it’s the misapplication or
misappropriation of the resources provided by the government for weapons. That’s why the Nigerian
military was unable to defeat Boko Haram.

Amanpour: General, you today just got a huge endorsement from a former ally of President Jonathan. That is the former president Obasanjo.
How do you react to that, I mean what would that do for your campaign?

Buhari: Well it would certainly bring more supporters to us and more confidence again to us from those who were sitting on the fence, because
General Obasanjo is highly respected and as far as Nigerians [issues are] concerned, there’s no serious issue that can be discussed without people seeking for his opinion and listening to it.

Amanpour: Can I now ask you about yourself because headlines around the world are portraying this election as a choice between a failed president
and a former dictator — and you’re the former dictator according to these headlines.
You know, people say — and they remember — that you expelled 700,00 migrants years ago thinking that would create jobs, that you’ve banned political meetings and free speech, that you’ve detained thousands of people, secret tribunals, executing people for crimes that were not capital offences.
Have you changed or is this what the Nigerian people have to look forward to?

Amanpour: Okay so now you say you’re a democrat. What do you think you can do to combat Boko Haram and to combat the galloping corruption in your country?

Buhari: Well, Boko Haram, we know how it started. Certainly the Nigerian military that built our reputation internationally for effectiveness, it’s a
great embarrassment to them and to the country that they haven’t been able to secure [Nigeria’s] territory of an area of 14 local governments out of 774 local governments. I believed this problem will not be too difficult for
[our] APC government because we know the Nigerian military is competent. It’s a question of making sure the money voted for equipment and training [is] properly utilised.

Amanpour: About corruption, there’s so many complaints from many people around your country about massive corruption they say. Can you face
up against them? Are you committed to rooting out corruption?

Buhari: We have to, because there are serious citizens of this country that say unless Nigeria kills corruption, corruption will kill Nigeria. And that’s
best illustrated by another hearing conducted by the National Assembly on pension fund, electricity and then the corruption in the petroleum industry from where the country derives over 90% in external revenue.
The National Assembly conducted a hearing here in Abuja and in the six geopolitical zones of the country, then they took the recommendation to the executive. And it’s been collecting dust for the past 18 months.

Amanpour: Alright, General Muhammadu Buhari,
opposition candidate in Nigeria. Thank you very much for joining us from Abuja tonight.