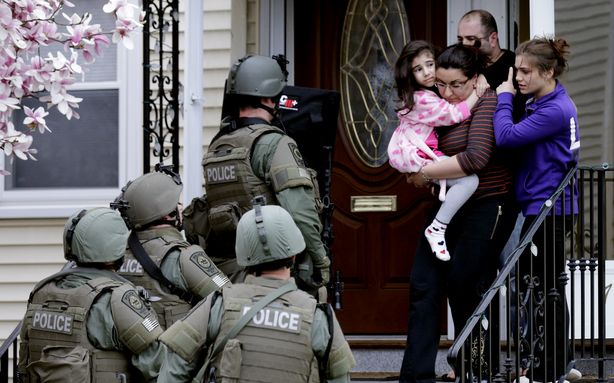 Michele Catalano was looking for information online about pressure cookers. Her husband, in the same time frame, was Googling backpacks. Wednesday morning, six men from a joint terrorism task force showed up at their house to see if they were terrorists. Which prompts the question: How’d the government know what they were Googling?

Catalano (who is a professional writer) describes the tension of that visit.

[T]hey were peppering my husband with questions. Where is he from? Where are his parents from? They asked about me, where was I, where do I work, where do my parents live. Do you have any bombs, they asked. Do you own a pressure cooker? My husband said no, but we have a rice cooker. Can you make a bomb with that? My husband said no, my wife uses it to make quinoa. What the hell is quinoa, they asked. …

The men identified themselves as members of the “joint terrorism task force.” The composition of such task forces depend on the region of the country, but, as we outlined after the Boston bombings, include a variety of federal agencies. (The photo above is from the door-to-door sweep in Watertown at that time.) Among those agencies: the FBI and Homeland Security.

Update 1:45 p.m.: In a conversation with The Atlantic Wire, FBI spokesperson Peter Donald confirmed The Guardian‘s report that the FBI was not involved in the visit itself. Asked if the FBI was involved in providing information that led to the visit, Donald replied that he could not answer the question at this point, as he didn’t know.  Read more