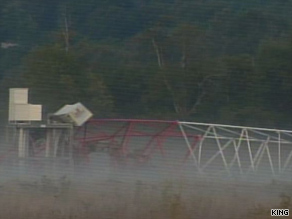 Much of the tower system, owned by radio station KRKO, was “flattened like a pancake,” the manager said.

The Earth Liberation Front (ELF) issued a statement saying opponents of the towers argue that “AM radio waves cause adverse health effects including a higher rate of cancer, harm to wildlife, and that the signals have been interfering with home phone and intercom lines.”

“When all legal channels of opposition have been exhausted, concerned citizens have to take action into their own hands to protect life and the planet,” Jason Crawford, a spokesman for the group, said in a news release.

Members of ELF have been sentenced for acts of domestic terrorism in the past.

Though no one is known to have been killed in ELF attacks, the government defines domestic terrorism as use or threatened use of violence by a domestic group “against persons or property to intimidate or coerce a government, the civilian population, or any segment thereof, in furtherance of political or social objectives,” the FBI’s then-domestic terrorism chief, James F. Jarboe, explained in congressional testimony in 2002.

The towers belong to radio station KRKO. “There’s quite a bit of destruction to the antenna system and it will probably take at least three months to get it back up and operational again,” station manager Andy Skotdal told CNN affiliate KIRO, adding that much of it was “flattened like a pancake.”

The station remained on the air by using a backup transmitter site, he said.

KRKO is working with authorities to find those responsible, Skotdal said, adding, “We’ll use our own airwaves to do it.”

The perpetrators stole an excavating machine out of a yard in order to knock down the towers, Skotdal said.

Watch the aftermath of the scene »

The Snohomish County Sheriff’s Office said the Seattle office of the FBI is the lead investigative agency in the incident. Officials at the FBI office did not immediately return a call seeking comment.

Snohomish County is just north of Seattle. The attack took place in an unincorporated part of the county, officials said.

In its news release, the ELF describes itself as “an international underground organization that uses direct action in the form of economic sabotage to stop the systematic exploitation and destruction of the planet. Since its inception in North America in 1996, the ELF has inflicted well over $150 million in damages to corporations and governmental agencies that are profiting from the destruction of the Earth.” source