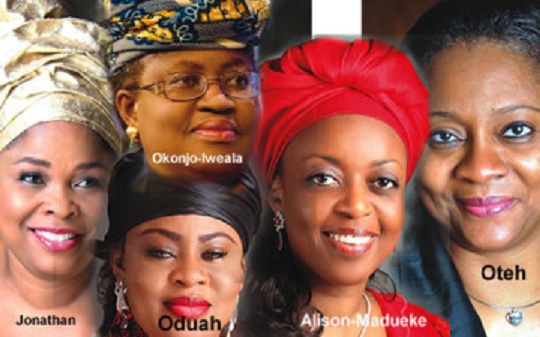 I almost forgot the adage which says: what a man can do a woman can do better, until three women in Jonathan government reminded me of it in the opposite direction.

The women in Jonathan government which I call “The Untouchables III” namely: Patience Jonathan, Diezani K. Alison-Madueke and Ngozi Okonjo-Iweala customised corruption and became the law themselves as no one could dare touch them.

Men have been known to be more corrupt than women in leadership and most aspects of life. But these three women are disgrace to womanhood and have shown that they are more corrupt than the men that once headed those offices with regard to Diezani K. Alison-Madueke and Ngozi Okonjo-Iweala. For Patience Jonathan, she followed the path of Turai Yar’Adua who turned late Yar’Adua into a mere inert resource for her diabolical schemes.

The likes of Stella Oduah-Ogiemwonyi, former Nigerian Minister of Aviation and Patricia Olubunmi Foluke Etteh, former Speaker of the Nigerian House of Representatives are among the women who have written their names in the “Book of Bad Leadership” as I call it.

Late Prof. Dora Akunyili will always be remembered as one of the few women in Nigerian government that lived an exemplary life and led with a good conscience and love for her country.