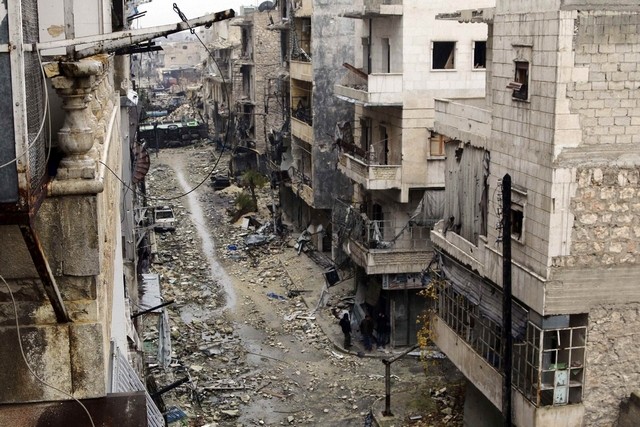 Four years ago, some may have been doctors, or teachers, or engineers. Many had their own homes and cars and put their children through good schools. They all had plans for the future. But all those plans fell apart when war broke out. These people fled their country in fear of their lives leaving everything behind them. They fled the sounds of bombs and guns. All they wanted was to live, to survive, and to save their children from that horror.

It is four years now since the fighting began in Syria. Now another month of Ramadan has come around, with all its abundance and beauty and warmth.

The Muslim world is rejoicing, but many people have a sorrowful joy in their hearts. There is the sadness of those who have fled the war being far from home. As for those who have opened their doors to them, there is the question of whether we are really able to welcome them properly and make them feel at home.

So what about the people left in Syria? They are looking at the cold face of war. In addition to the psychological trauma caused by the sound of bombs and bullets, the want and poverty in the country are continuing unabated in this month of Ramadan. People there are living in dire need of aid to be sent by humanitarian organizations.

There are no queues for special Ramadan bread in Syria in the way that there is in Turkey; no aroma of freshly-baked bread wafts from the bakeries in Syria at iftar times because Syria is in a state of ruin. Everywhere is dark and covered in dust. There are no ovens to make bread, and no ingredients to make it from. People find it difficult to get hold of drinking water. Little Syrian children wait for hours with cans as large as themselves in queues for water while their contemporaries in other countries stand in front of beverage dispensing machines with coins in their hand, wondering which flavor to choose.

Some of the greatest delights of Ramadan are the lights that shine from the minarets at iftar: This is a tradition unique to Ramadan. Yet people in Syria are unable to check whether or not the mosque lights have gone on to see if iftar has begun. There are no iftar lights in the mosques in Syria, no calls to prayer and no acts of worship. Wicked forces fire rockets, particularly at places of worship in Syria. Hundreds of mosques have become unusable due to incessant bombing.

There are no Ramadan drummers to wake people up at sahur in Syria. No drummers later going from door to door to ask for tips. When people in Syria go to bed, they are awoken from their fitful slumber to the sound of bombs, not of drums. Instead of the joy and excitement that Ramadan drums instill in people’s hearts, the fear and worry and tension caused by bombs and artillery duels prevails in Syria at sahur time.

One decorative element are the cannons that go off at iftar. They tell people that the hour of iftar has arrived and that cannonade is a joyful sound; they are unique to Ramadan. But the only sound to be heard in Syria is that of bombs and rockets and shells raining down on people’s heads: ordnance that kills and spills blood.

That is how those left in Syria are celebrating Ramadan, the sultan of the months of the year. Yet the determination to perform their religious observances with passion and fervor is still in people’s hearts, despite all the horrific obstacles they face. Let us keep them in our thoughts and prayers and let us endeavor that peace returns to Syria – and other war-torn places in the Islamic world – and that Ramadan will return as a time of peace, a month of profound spirituality and a month of brotherhood and abundance.