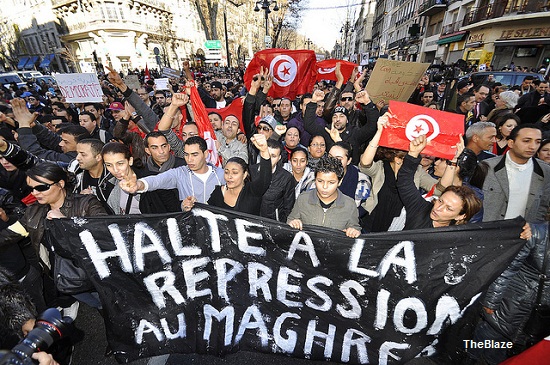 Violent protests in Egypt, in Tunisia – The Arab Spring was never about democracy, it was all about the global economy

NewsRescue- 2011was highlighted with riots in the Middle East and indeed in Europe. The Middle East riots were branded the ‘Arab Spring,’ and people were made to believe that they were some sort of protests for democracy in Arab Nations. The fact that similar riots and changes of government were occurring at the same time in Europe, failed to convince the people that this was no pro-democracy revolution.

The government of Tunisia was toppled, and that of Egypt, later Libya fell under a NATO organized campaign in support of Benghazi rebels and al Qaeda terrorists. Qatar, Saudi Arabia, Turkey and NATO have continued to sponsor a rebel and terrorist campaign against the government of Syria.

Slowly, the truth of the events is coming to the light, as riots, instability and government changes continue in Europe, but more so, the new regimes that replaced the so-called dictators the people in North Africa and the Middle East ‘hated,’ have failed to bring about any difference, simply replacing one evil for another. Uprisings, bloody uprisings continue unabated in Egypt, Tunisia and Libya as the hardships that actually caused the revolutions remain and are even getting worse.

The headlines for the last few days have been filled with the scary situation in Egypt as Morsi, the new ‘elected’ president from the Muslim Brotherhood grabs power to dictator status.

In Tunisia, there were violent job protests today, with over 200 injured as the youth,  frustrated with the continued hardships asked for the PM to resign. Tunisian Prime Minister Jebali accused opposition parties of presenting the situation as his doing.

“In democratic systems, we don’t force down governments. I’m not going to resign or dissolve the government. It’s parliament that has authority to do that,” Jebali told a news conference. -(Reuters)Yahoo News

These parts of the world and most of the so-called developing world have very high youth populations and these, coupled with the global meltdown caused by corporate greed and Wall street ‘futures’, gambling away with the worlds economic posterity, prices of food and other essentials are the real cause of turbulence.

Corporate Media Lies to You

There is a Global Famine. Yes, we have been saying this since last year, some experts even picked this up earlier. This artificial and corporate insolence created famine is a critical aspect of the crises happening right now that is leading to the instability and distrust in governments worldwide. Recognizing the problem is perhaps the first step at solving it.