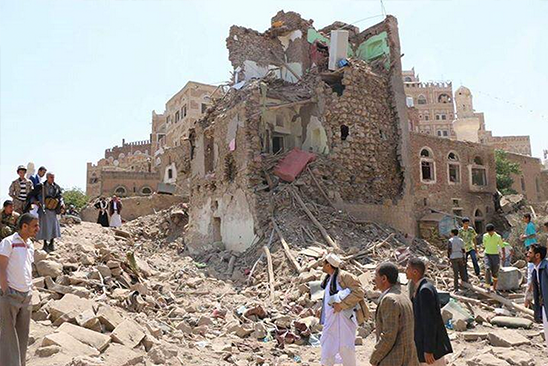 Yemen officially known as the Republic of Yemen, is an Arab country in Southwest Asia, occupying the southwestern to southern end of the Arabian Peninsula. Yemen is the second largest country in the peninsula, occupying 527,970 km2 (203,850 sq mi). The coastline stretches for about 2,000 km (1,200 mi). It is bordered by Saudi Arabia to the north, the Red Sea to the west, the Gulf of Aden and Arabian Sea to the south, and Oman to the east. Yemen’s constitutionally stated capital is the city of Sana’a. Yemen’s territory includes more than 200 islands; the largest of these is Socotra.

The present crisis in Yemen started when the tenure of the former president Abd Rabbuh Mansur Hadi expired & the Houthi Ansarullah movement took over to form a broad-based government to prevent a leadership vacuum in the country. Yemen’s fugitive former president, Abd Rabbuh Mansur Hadi, was an American stooge that allowed the American embassy in Sannaa to rule Yemen & he also gave America the largest military base in Yemen to stations its drones & other intelligence gathering equipments. The whole world agreed that Mansur Hadi was corrupt & ran a corrupt government that further impoverish the already poor Yemenis. The American imperialists were comfortable with this as long as they are the ones controlling the country.

The Houthi Ansarullah initiated a movement that is geared to bring an end to the endemic corruption in Yemen, form a broad-base government that represent all sections of Yemen, expel the American imperialist from Yemen, fight AlQaeda & terrorism & improve the living condition of poor Yemenis. This movement have the support of broad section of Yemenis that included both Sunnis & Shias. American imperialism was not happy with this development & they used their tool in the Islamic world which is the Al Saud regime to declare war on Yemen. As usual the Saudi regime portray the Yemeni issue as sectarian & formed a coalition of eleven (11) countries that included Egypt to blockade Yemen & bomb it to submission. The Saudi regime poisoned the minds of Sunnis by claiming that the Shias want to take over Yemen & by extension “invade Saudi Arabia to take over the Ka’aba”. Some Muslim countries like Pakistan refused to be part of the American-backed coalition saying it will trigger a sectarian war in the Islamic world.

The American imperialist agenda had an extension of its imperialist projects in Syria and Iraq and that is to Balkanize Yemen into north and south and for these two to be perpetually at war with each other, that is why the sectarian agenda was introduced. This agenda is part of the wider Zio-Western agenda to Balkanize certain Arab states for the security of the Israeli regime.

The question is that is this the first time that a Shia ruled Yemen? Former Yemeni President Ali Saleh is a Shia Muslim & he ruled Yemen for more that twenty years (20) with the support of America & Saudi Arabia. For all those years the Saudis did not brainwash Sunni Muslims that “Shias want to take over Yemen”. Today the Houthi Ansarullah movement has broad support in Yemen & many Sunni tribes are among its fighters. Some Sunni clerics are among its ardent supporters & just last month the Saudi regime sent its AlQaeda dogs to assassinate a Sunni scholar who support the Ansarullah movement.

The U.S.-Saudi coalition has been bombing Yemen for more that three months now & more than 5000 Yemenis have been killed of which most of them are civilians that included more than 700 children. This bombing campaign has destroyed Yemeni infrastructures & historical monuments that included a historical mosque that is more than 1200 year-old. And the Saudi regime brought their ISIS & AlQaeda dogs to Yemen to be planting bombs in Mosques & market to kill innocent Yemenis.

The Houthi Ansarullah movement & the Yemeni Army had resisted this American-backed aggression against Yemen, though they withdraw from the Southern city of Aden to avoid further civilian casualties due to Saudi-led bombing of residential areas. After they withdrew AlQaeda hoisted its flag in Aden, the same AlQaeda that the Americans fraudulently claimed to be fighting in Yemen. One important thing to note in this aggression against Yemen is that America & Britain are the ones coordinating the campaign. They provide all amunitions to the Saudi-led coalition, they provide satellite images & the intelligence needed. They also re-fuel the jet fighters taking part in the campaign & rescuer all pilots whose planes were shot down over Yemen.