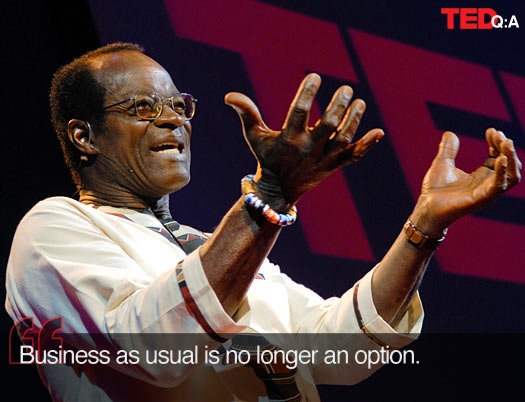 NewsRescue[Op-ed] One of the world’s foremost economists, Professor George Ayittey has lashed out at the President of Nigeria, Goodluck Ebele Jonathan (GEJ), describing him as “a joke” and a mediocre President after his (GEJ’s) encounter with the media last night.

According to Professor Ayittey, Nigeria “deserves a better leader”, judging by GEJ’s poor, almost unfortunate responses to some of the questions posed to him by the Nigerian media last night.

The Professor indicated that GEJ’s refusal to declare his assets and his failure to tackle the Boko Haram crisis suggest that he is of an unsound mind.

He therefore called on Nigerians to rid themselves of GEJ as soon as possible.  He said:

“Nigerians should not put up with such mediocrity and should mount a RECALL GEJ campaign. They should check Chapter VI of their Constitution. See Sections 143 and 144 about removing the President and Vice-President from office other than through elections”. “137; 1c: “A person shall not be qualified for election to the office of President if under the law in any part of Nigeria, he is adjudged to be a lunatic or otherwise declared to be of unsound mind.”

Professor Ayittey, a Ghanaian economist, author, president of the Free Africa Foundation in Washington DC, professor at American University, and an associate scholar at the Foreign Policy Research Institute, made this known on twitter this morning.

“Look, this GEJ guy is a joke – a meretricious mediocrity. Nigerians deserve a better leader. Fancy his statements and responses to questions in a media chat on June 24, 2012:

• He has not visited Borno state, the center of Boko Haram attacks, because the airport there was not functional at the time he planned to visit. “And we did not want to land somewhere and fly in to Maiduguri with a helicopter for obvious reasons.”

[Why is the airport not functioning? Why hasn’t it been fixed? And are there no ROADS into Borno State?]

• Asked why he had not declared his assets, Mr. Jonathan replied in an impatient tone, stating “I don’t give a damn” about declaration of assets. He related that he had gone to the late President Umaru Yar’Adua to caution “that we should not play to the hands of some people [by openly declaring their assets].” Mr. Jonathan added, “That is a matter of principle and I am not going to declare. It is not the president declaring his asset that will end Boko Haram.” • The president said it’s a matter of principle and whether he is criticised from “head to toe” he will not declare his assets. “It is not right,” he said. “I didn’t want even want to declare my assets as VP” but was forced by the then president, Umara Musa Yar’Adua. He said asset declaration is “not the right thing to do.”

• Agriculture: The president said his government is revolutionizing agriculture in Nigeria.”We are giving cotton seeds free in the North” he said.
[This is the most crass definition of an “agricultural revolution” – by providing free seeds.]

• UNILAG name change: The president said what he did, in terms of law, was correct. You change the name first, then send the bill to the National Assembly later, he argues. “What we did, was the normal procedure,” he said.

[No, Mr. Presient, you had it backward. Before you change the name of University of Lagos (UNILAG), you consult with the university and the student body, which you did NOT do.]

• Crude Oil Theft: “The stealing of crude oil is a Nigerian phenomenon,” the president said. He adds that it has gone cancerous. “We will stop it, but it is like allowing a cancerous cell to grow into a major tumor.”
[Mr. President, theft of crude oil is a CRIME, not a “Nigerian phenomenon or a disease afflicting Nigerians. Describing it that way means you are CLUELESS about how to solve it.]

Nigerians should not put up with such mediocrity and should mount a RECALL GEJ campaign. They should check Chapter VI of their Constitution. See Sections 143 and 144 about removing the President and Vice-President from office other than through elections.

137; 1c: “A person shall not be qualified for election to the office of President if under the law in any part of Nigeria, he is adjudged to be a lunatic or otherwise declared to be of unsound mind.” Link: http://bit.ly/MSxUws ”

He founded The Free Africa Foundation in 1993, to serve as a catalyst for reform in Africa. In 2008 Dr. Ayittey was listed by Foreign Policy as one of the “Top 100 Public Intellectuals” who “are shaping the tenor of our time”. He lives in Lorton, Virginia. What do you make of his comments? Is Professor Ayittey justified in his criticism of GEJ?