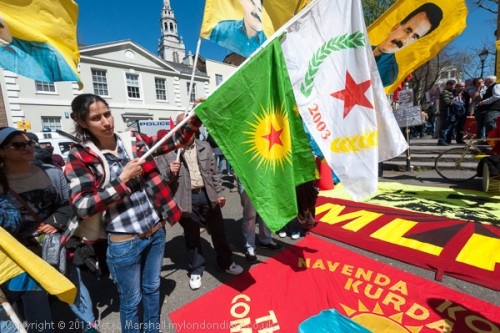 For a while now in the Western media, the YPG has been propagandized as ‘freedom fighters’ standing up to ISIS. How much of this information reflects the truth? Yes, ISIS resorts to the most unacceptable forms of violence. However, the YPG is a terrorist group that does not recognize dissent and conducts ethnic cleansing and oppresses people by force of arms. The YPG -although the name is different- is the PKK itself; one of the bloodiest terrorist organizations in the Middle East that has caused the deaths of more than 40,000 people.

While arming a terrorist organization itself is an extremely dangerous strategy, arming an organization such as the YPG/ PKK, a group that believes in the notion of bloody and violent revolution, is a major disaster. The allegations in some media organs that the PKK will disarm and continue its struggle peacefully do not reflect reality. In fact, one of the PKK’s leaders, Murat Karayilan’s statement in November 2012 explicitly reveals this truth, “Our agenda is not to disarm, but the of issue arming intensively. We are struggling for arming in a more competent manner.”[i]

It is very clear that the terrorist organization’s periodic calls for a “ceasefire, a search for solutions” have in fact turned into periods of “arming and acquiring new militants“. The most tangible evidence of this can be found in an intelligence report submitted to the MGK (National Security Council) in August 2015. According to the report, during the time the PKK had stated their so-called “retreat” period, 80,000 long-barreled weapons were stored in the cities.[ii] The PKK, throughout both the Oslo Process and the Peace Process, has amassed tens of thousands of tons of explosives in cities. [iii]

The Deep States competing to arm the PKK

In both the MIT (National Intelligence Organization) and TAF (Turkish Armed Forces) reports, as well as in the WikiLeaks documents, it can be seen that many countries are providing material support to the PKK in the form of armaments. [iv]

Former Foreign Minister Mevlut Cavusoglu has stated “the sources of the weapons in the hands of the PKK are weapons randomly distributed by the U.S.A, Germany, England and France in Syria and Iraq.”[v]

In previous intelligence reports submitted to the Chief of Staff, the weapons now used by PKK (long-barreled weapons, mines, rockets, guns, grenades, etc.) were proved to be from Russia, China, Hungary, Bulgaria, U.S.A, Britain, Czechoslovakia, Spain, Iraq, Spain, Italy, Germany.[vi] And the explosives and mines that the PKK has recently started planting on the roadsides are mainly from Russia, South Korea and China.[vii]

The American AP news agency announced that in an operation against the PKK, the Turkish army seized some weapons that were of American origin.[viii] It is known that one out of every twenty-five weapons sent to Iraq from the US is lost and, between 2003 and 2007 alone, 370,000 weapons were sent to the region.[ix] Thus, aside from the 1,250 weapons seized by our security forces, it has been noted by US officials that 14,000 weapons have also been “lost”. These weapons are now in the hands of the PKK.

Weapons to the PKK were delivered by an American private security company cited for numerous murders in Iraq.[x]

Recently, an unmanned reconnaissance aircraft was shot down in our borders, and it was discovered that the YPG/PKK was using it. It is known that since 2012, drones are being used by the PKK.[xi]

Germany’s official press agency DW admitted in 2005 that some five thousand illegal guns were delivered to Iraq and that these weapons are now used by the PKK. [xii] In an article in the Guardian, it was noted that the Russian deep state has been deeply involved in the armament of the PKK. [xiii]

Der Spiegel stated that weapons produced by Germany were given to the Peshmerga by the RoyalNetherlands Air Force cargo planes, but somehow seized by the PKK.[xiv] Recently, it was revealed that the PKK has ‘Russian missiles’, and that these were given to the PKK/PYD by the Syrian Ba’ath regime.[xv][xvi] Weapons found on terrorists to take down helicopters were found to be of US origin.[xvii] The weapons given to the PYD by the US for operations in northern Iraq are understood to have been moved to the terrorist camps. [xviii]

50 tons of American weapons were given to the PYD (the Syrian branch of the PKK) with planes, which took off from Incirlik Air Force Base. [xix]

It was reported that the PKK/PYD recently wanted Stinger missiles from the United States and, according to some sources, they apparently have received them. These missiles, which are used against air attacks, are clearly to be used against Turkey since ISIS does not possess an air force and they will not be used against the Syrian or Iraqi regimes which do not fight against the PKK.[xx]

Undoubtedly, equipping terrorist organizations with advanced weapons is not only a threat to the Middle East but to the entire world. It should not be overlooked that the PKK, which has many members in Germany, Denmark, France, may well use these heavy weapons one day against the aforementioned countries and if world peace is desired, than solutions based solely on military methods must be abandoned.

[i] PKK will not disarm http://harunyahya.org/tr/Makaleler/201499/pkk-silah-birakmaz#.Vi1ThyJalmA.twitter
[ii] They said ‘we are retreating’ but stored 80 thousand weapons http://www.sabah.com.tr/gundem/2015/08/08/cekiliyoruz-dediler-80-bin-silah-depoladilar
[iii] PKK is blasting the bombs stored during Oslo and the Solution Process http://www.21yyte.org/tr/fikir-tanki/10883/pkk-oslo-ve-cozum-surecinde-depoladigi-bombalari-patlatiyor-askerpolis-halen-mesru-savunmada
[iv] MIT, Chief of Staff and Wiki leaks were right – http://gazetepolitik.com/mit-genelkurmay-ve-wikileaks-hakli-cikti/
[v] Who is giving the weapons to PKK? – Arslan BULUT http://www.yenicaggazetesi.com.tr/pkkya-silahi-kim-veriyor-35704yy.htm
[vi] List of PKK’s weapons http://www.hurriyet.com.tr/iste-pkknin-silahlarinin-listesi-6922630
[vii] Intelligence Unit’s PKK report! http://www.yeniakit.com.tr/haber/istihbaratin-pkk-raporu-96151.html
[viii] Who is PKK getting the weapons from? http://www.yenisafak.com/yazarlar/cemkucuk/pkk-silahlari-kimden-aliyor-34019
[ix] Who’s Behind the PKK? – http://original.antiwar.com/justin/2007/10/29/whos-behind-the-pkk/#.Vi4TnUVtBl0.twitter
[x] Feds Probe Blackwater Weapons Smuggling http://www.military.com/NewsContent/0,13319,150197,00.html
[xi] Israeli drones are reported spying on Turkey for the Kurdish group PKK http://mondoweiss.net/2012/01/israeli-drones-are-reported-spying-on-turkey-for-the-kurdish-group-pkk
[xii] 5 thousand weapons to PKK from Germany http://www.gazetevatan.com/d/t.aspx?ID=676808
[xiii]Countries selling weapons to PKK according to http://www.haber7.com/guncel/haber/654337-wikileaksa-gore-pkkya-silah-satan-ulke
[xiv] How did German weapons reach PKK http://www.haber7.com/guncel/haber/1555140-alman-silahlari-nasil-pkkya-ulasti
[xv] New missiles of PKK! http://hbr.tk/SgJMO3
[xvi] Shocking claim: PKK has SA-8 missiles http://www.internethaber.com/sok-iddia-pkknin-elinde-sa-8-fuzesi-var-698565h.htm[xvii] Unknown PKK Weapon ‘ is from the US Military http://www.haberler.com/bingol-de-emniyet-muduru-atalay
-ulker-e-saldiri-7720533-haberi/?utm_source=haberler.com&utm_campaign=twitter_paylas
[xviii] In an operation to the PKK, US weapons were found http://www.aydinlikgazete.com/turkiye/pkkya-operasyonda-abd-silahlari-bulundu-h74878.html
[xix] 50 tones of weapons went to PYD from Incirlik http://www.bugun.com.tr/gundem/incirlik-ussunden-pydye-50-ton-1877274.html
[xx] PKK requested Stinger from the USA! http://www.aksam.com.tr/guncel/pkk-abdden-simdi-de-stinger-istedi/haber-451886/