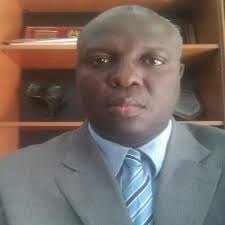 Although, no reason was given for his sack, insider sources according to Thecable said he was sacked over some “shady deals” and for “undermining” the president.

According to the online newspaper, Mani committed various misdemeanours, “chief among which was a recent discovery that he was actually the one who leaked Buhari’s itinerary to Diezani Alison-Madueke when he travelled to London in May”.

The rest of the report by TheCable reads:

Alison-Madueke, then minister of petroleum resources, had surprisingly travelled on the same British Airways flight with Buhari, sitting in the same cabin and right behind the then president-elect.

The former minister normally flew private jets in and outside the country and her presence on the flight was not considered a coincidence.

It was alleged that she wanted to curry the favour of Buhari following a series of allegations of corruption against her, although her aides denied the claim, maintaining that she was on a private trip for her son’s graduation.

“Investigations also revealed that Mani has been actively undermining the president, working against every value the president upholds and conducting himself in such a manner as to suggest that he is out to pull down the president,” the source said.

Mani was appointed Buhari’s CSO after the presidential election in March. Buhari also fired Widi Liman, his administrative officer, who was said to be hand-in-gloves with Mani in turning securing appointments with the president into a “business venture”.

Bashir Abubakar is the new CSO to the president while Mani has been redeployed to Ebonyi state.

Abubakar was until now an assistant director in the Bayelsa state command of the Department of State Service (DSS).

Liman, who is yet to be replaced, was a close aide to governor of Kaduna state, Nasir el-Rufai, while he was FCT minister. He has been transferred to Oyo state command of the DSS.

LEADERSHIP Sunday gathered reliably that President Muhammadu Buhari yesterday relieved Mani of his job and asked the State Security Service (SSS) to redeploy him out of Aso Rock.

Although there was no official statement to this effect, as at press time, LEADERSHIP Sunday gathered that Mani’s sack was as a result of issues bothering on going against a presidential directive, indiscipline and indiscretion in leaking an official memo to the press, following his recent face-off with the Aide-de-camp (ADC) to the president, Mohammed Abubakar, over job description between the Armed Forces personnel and personnel of the DSS at the villa.

A reliable source in the presidency confided in LEADERSHIP Sunday yesterday that the president considered Mani’s action (countering his directive and leaking of the memo to the press) insubordinate, especially that he was aware that the ADC (Abubakar) was acting on him (the president’s) directives.
Another top presidency source told LEADERSHIP Sunday that apart from his rift with the ADC, Mani’s alleged penchant for always preventing some persons on appointment from seeing the president may have been the last straw that cost him his job.

“You are aware that this president is a man who can be reached easily on phone. There were series of complaints that the erstwhile CSO had been preventing people scheduled to see the president on appointment, from having access to him. The issue of job specification for the SSS and the Army personnel may be one issue, but I think that particular issue might be the one that he bit more than he could chew,” the source added.

Recall that the Abubakar had in a memo, directed DSS personnel to withdraw from giving close protection to the president to guarding the outer perimeter of the Villa, on the ground that the job was meant for military personnel and officers of the Nigeria Police Force who are trained as Presidential Body Guards (PBGs).
He noted in the memo that, while the military and police are to “provide close/immediate protection for Mr. President”, the DSS personnel should stay away from areas he listed to include, “Admin Reception, Service Chiefs Gate, Residence Reception, Rear Resident, Resident Gate, Office Reception, C-In-C Control Office, ACADE Gate, C-IN-C Control Gate and Panama.

“However, the personnel of the DSS in conjunction with other security forces are to man other duty beats/locations located within the immediate outer perimeter of the Presidential Villa,” the memo read.

But in a counter memo dated June 26, 2015 to the ADC, the former CSO, Mani, turned down the directive, just as he directed the DSS operatives to disregard the spirit, intent and content of Abubakar’s memo.
Accusing Abubakar of overzealousness, grandstanding, limited knowledge and outright display of ignorance, Mani said the ADC’s circular “grossly misrepresents” the president’s directive.

Mani, who as CSO, was the head of SSS operatives in Aso Rock noted, “though further actions have been initiated in this regard, including routine redeployment of close body guards out of the villa, and deployment of new ones, it is important to state that the duties hitherto performed by the personnel of the DSS (SSS) in the Presidential Villa and/or any other Key Vulnerable Points (KVPs) are backed by relevant Statutes and Gazetted Instruments of the Federal Republic of Nigeria.