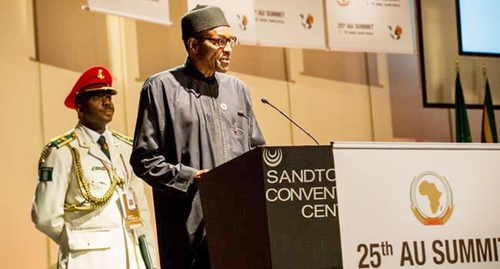 Speaking in far away France today, President Muhammadu Buhari has disclosed that his administration has updated its rules of engagement in the fight against terrorism.

The president said his government shared the European Union’s commitment to peace and security, adding that he also shared the UN’s respect for human rights, democracy, good governance, equality and tolerance, as ways of developing prosperous and strong societies.

“For our part, we have updated our rules of engagement in fighting terrorism and pay very close attention during operations to the treatment of captured terrorists, civilians caught up in the conflict and in general, safeguarding property. Our aim is to use minimum force necessary in our fight against terrorists,” Buhari assured members of the parliament and the European Union Commission.

He assured the European Union that his government was “doing its utmost best to protect the fundamental human rights of persons in the theatre of operations against Boko Haram”.

President Buhari sought greater support from the European Union for Nigeria’s efforts to curb the theft of its crude oil and corruption in its oil and gas sector.

“Nigeria is facing the challenges of oil-theft and illegal bunkering in the Niger Delta as well as recovery of illicit funds. In this regard, Nigeria solicits the cooperation of the European Parliament to support the efforts aimed at stemming these vices.

“Our attempt to restore security, curb corruption and fight crime will result not only in improving social stability in Nigeria but will re-open the doors for full economic relations with Europe and the rest of the world.

“Those who wish to invest in our country have immense opportunities and we intend to guarantee the security of people and investments brought to Nigeria,” Buhari said.