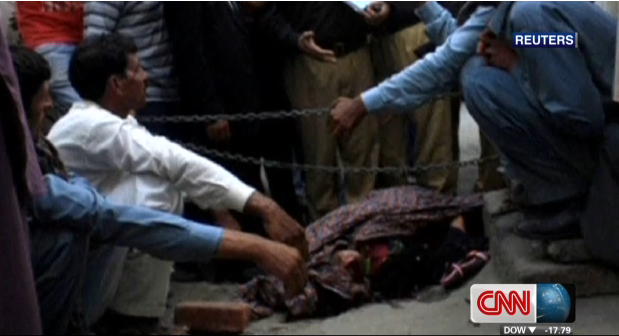 (CNN) — The husband of a Pakistani woman stoned to death for refusing to participate in an arranged marriage told CNN her family had demanded 100,000 rupees if the couple wanted to stay alive.

Husband Mohammad Iqbal said he didn’t have the money, which equals about $1,000. Farzana Parveen, who was three months pregnant, was beaten to death with bricks Tuesday in the eastern city of Lahore by a group of about 20 people, including her brothers, father and cousin, police said.

Police are searching for the killers in this all-too-common crime. According to a report published in April by the Human Rights Commission of Pakistan, 869 women in the country were victims last year in “honor killings,” so named because the woman’s actions are considered to have brought shame on her family.

Most honor killings occur in rural areas. Tuesday’s attack was unusual because it happened in a public area of a big city.

Iqbal, in an interview with CNN, said Parveen and he were supposed to marry, with the family’s approval, last year. He was a widower and neighbor. As part of the arrangement, Iqbal said, he’d given Parveen’s father 80,000 rupees and gold jewelry.

Last December, Parveen’s mother died and her father and brothers changed their minds about the marriage, Iqbal said.

The family decided Parveen, 25, who came from a village in Punjab, should marry a cousin, police said.

Parveen and Iqbal eloped and were married January 7 in a court ceremony. He said she liked the color white and that she was a “beautiful and good wife.”

“We were happy,” he said, though they were constantly worried about their safety.

“She loved us,” said Aurengzeb, Parveen’s stepson. “She always made the most delicious meat stew for us.”

The marriage enraged her family, Iqbal said, and they demanded he pay them 100,000 rupees to let the couple stay alive.

Iqbal, a farmer in the village in Jurranwala, Punjab, didn’t have the money.

The family had challenged Parveen’s marriage to Iqbal in the courts, accusing him of abducting her.