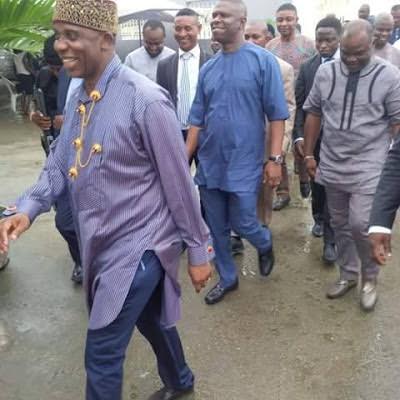 The Rivers State Chapter of the All Progressives Congress (APC) has alleged that the State Governor, Chief Nyesom Wike, lives in perpetual fear of Senator Magnus Abe and is desperately looking for a way to pull him down. The party made the claim in a statement it which it berated Wike for making a false allegation of embezzlement against Abe.

The statement signed by Rivers APC Chairman, Chief (Dr.) Davies Ibiamu Ikanya, advised Wike to leave Abe alone and concentrate on the job of governing Rivers State, which he took by force.

The statement said: “We have watched with chagrin the continued macabre dance and unrelentless castigation of the person of Senator Magnus Abe by Chief Nyesom Wike, the Governor of Rivers State, a clear evidence that he dreads the person of Senator Abe. As we sympathise with Wike over his phobia for Abe, we will like to assure him that none of his antics will prevent Abe from rejoining his colleagues at the Senate after the rerun election as the Ogoni and the entire South East Senatorial zone know where their bread is buttered.

“Wike should tell the entire world what project he has commissioned in the entire Ogoni land apart from relocating the Ken Wiwa Polytechnic to his local government (OBIO-AKPOR) and renaming it Rivers State Polytechnic. Wike’s other feats in Ogoni includes sponsoring killings and insecurity in the area. He should leave the Ogoni and Rivers people alone to elect the candidates of their choice – not imposed and influenced by acts of brigandage and militancy.”

Rivers APC noted that Abe has proved himself not only as a seasoned administrator in all the offices he has occupied till date but is also better qualified than the low-level candidate that Wike’s Peoples Democratic Party (PDP) is presenting to represent the zone. “Abe has been a tool for bringing the attention of the Federal Government to the need for the cleaning up of Ogoni. Anybody campaigning against him must be seen as an enemy of the entire Rivers State because such a fellow is trying to deny Rivers State a quality representation which Abe represents,” the party said.

It commended Dr. Austin Tam-George, the Rivers State Commissioner for Information, who recently on 91.7FM Port Harcourt stood by the truth by not only vindicating Abe but also shaming Governor Wike by telling the whole world that the Government of Rivers State has no document to substantiate its claim that Magnus Abe embezzled N4 billion meant for the construction of Kpopie – Bodo Road. “This is an accusation which Wike has continued to dish out just to run down a personality he knows that is far superior to him in all ramifications – of course except in the act of engineering the killing of opposition political leaders, promotion of insecurity and misappropriation of Rivers State funds,” the party said.

It stated unequivocally that Abe’s company has completed the Kpopie – Bodo Road 90 percent “but Wike in his misguided policy has refused to pay Abe the remaining sum needed to complete the road but instead embarked chose to re-award the contract, which is not in the 2016 budget, to one of his own companies to further siphon Rivers’ funds.”

“We understand why Wike dreads Abe so much and is ready to engineer further killings and total destruction of Ogoni land to ensure that the people do not elect the candidate of their choice but we wish to advise him not to over-stretch his luck this time around because God is still on His throne,” the statement concluded.