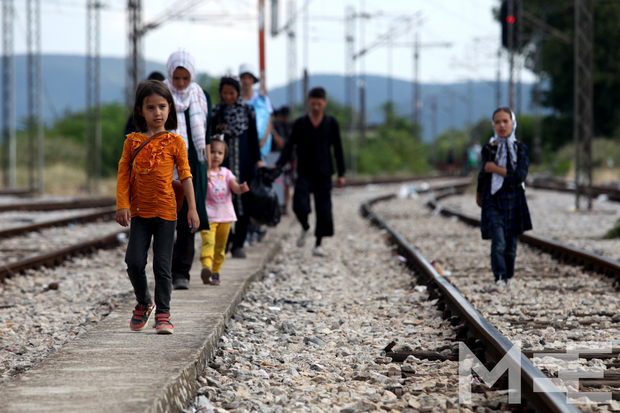 Last week we saw tragic images from Macedonia of refugees trying to cross the border. Thousands of poor people massed on the frontier maybe never imagined they would be met with violence from the Macedonian police or razor wire intended to stop them crossing. These people had fled countries where wars were taking place and set off on voyages of death on bow-up boats to Greece. The words roll easily off the tongue, but more than 2000 migrants have died on the Mediterranean, the main scene of this activity. Just as they were rejoicing at having made it, those refugees managing to complete the voyage of death never expected to be welcomed in such a way by an EU country.

We are speaking about Syrian, Eritrean, Somalian, Iraqi and Afghan refugees headed for Germany in order to guarantee their lives. They have left their countries, not for a better life or due to poverty, but to survive. The words of one young refugee from the Macedonian border town of Gevgelija clarify the situation: “Any country is better than my country. In my country, there is war and killings.” Risking death to escape death is a huge statement of despair, yet sad to say, few people living in comfort may realize this.

Europe is now being tested on this subject. Although voices of good conscience are being raised and the great majority of European people rush to help the refugees, some European leaders still seem not to have realized the ‘refugees’ are not a problem, but an obligation. The failure of Great Britain, France and Germany to agree on a solution and the rejection by European countries of proposed solutions from Brussels have made the situation much worse. Each EU country is determined to allow in only a limited number of refugees. The quota proposed by the EU suggested that the 28 member countries would receive numbers of refugees based on their own economies and populations. However, this has been shelved due to countries objecting to the numbers. While Hungary has been constructing a giant wall to prevent migrants entering the country, other countries, such as Slovakia and the Czech Republic, have again revealed the terrifying scale of the European refugee crisis by announcing they will only take limited numbers of ‘Christian’ migrants. Although Slovakia has since retracted this, these words from Slovak Prime Minister Roberto Fico, who rejected a request from the EU to accept 1100 migrants, is truly pitiful: “I have but one question. Who bombed Libya and caused the problems in North Africa? Slovakia? No.”

It was the U.S. that started the Afghan war, and Assad that started the war in Syria. Yet neither Pakistan nor Turkey, Lebanon or Jordan ever asked who started the war as they admitted almost 6 million refugees. Those countries were aware that they were looking at a humanitarian crisis. Turkey is currently the country that has admitted the most refugees in the world. This flow of refugees, 1.6 million according to official figures or 2.5 million unofficially, is without doubt a problem for Turkey, whose revenues are much lower than those of European countries. Yet Turkey never made that problem felt to anyone. Nobody ever thought about the great responsibility undertaken by Turkey as it spent $6 billion from its own budget on refugees and allowed 350,000 refugees a day into the country during the assault on Kobani. Yet all the outcry in Europe now is all over just 107,000 refugees who have arrived in the area since July. Twenty-eight countries with some of the strongest economies in the world refuse to assume responsibility for looking after 107,000 people.

Readers will remember that this conflict also broke out of the dispersal of just 40,000 migrants in recent months, and no results were achieved. European Parliament Group Chairman Gianni Pittella said this on the subject:

“The fact that Member States have failed to reach an agreement on the relocation of just 40,000 refugees after five months is ludicrous… While certain EU Member States bicker over whether to take 250 or 500 refugees, Turkey, Lebanon and Jordan have taken over 3.5 million. This is both a testament to these countries’ humanity and solidarity and an indictment of Europe’s lack of either. How can we still claim humanitarian leadership in the world in the face of such numbers?”

Italian Prime Minister Matteo Renzi reacted in a similar manner: ”If you do not agree with the figure of 40,000 asylum seekers you do not deserve to call yourself Europeans. If this is your idea of Europe, you can keep it. Either there’s solidarity or don’t waste our time.”

Europe’s fear that the flow of refugees in the world might also end in terrorists reaching it is certainly understandable. Yet there is a solution to it; it would be easy enough to establish refugees’ identities and settlement. However, to forget that wretched people who have fled their own countries are human and to regard them as a burden, while demanding that others accept ‘greater share of that burden,’ may turn into a terrible tragedy that may debase Europe’s own societies at any moment. Europe can only achieve true civilization when it regards refugees fleeing death as guests from God and looks on the subject, not as a problem, but as an opportunity to contribute to humanity. Lovely Europe, with its fine people, democracy and culture, must be a union of freedom and civilization that put humanity above all else, rather than a union of an elite focused on enrichment. The main way of achieving that is to abandon the primitive mindset that classifies people on the basis of their race, religion or way of life. One of Europe’s worst historic errors was because of that mindset, and the time has now come to make amends.