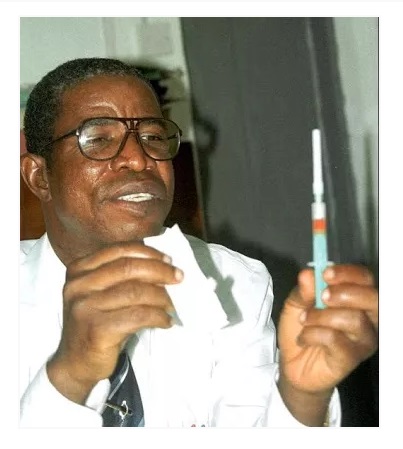 Jeremiah Abalaka, a surgeon turned immunologist, who claimed to have developed a vaccine for the Human Immunodeficiency Virus, HIV, said he would only release his vaccine recipe to the Nigerian government under negotiated agreement.

Speaking with journalists in Abuja on Saturday, Mr. Abalaka said as a New Year gift to Nigerians, he would willingly work with various interested government agencies to ensure his discovery was put to good use.

However, he said this would only happen under a negotiated agreement with the Nigerian government.

His vaccine recipe, he said, will be released to a chosen representative of the Nigerian government – a person of relevant profession for whom he will organize a workshop with practical sessions.

The workshop will focus on the production, storage and administration of the vaccines.

“The point must be made clear again and again that I do not claim and I have never claimed to have discovered cure or prevention for AIDS,” he said. “I have only developed safe and effective vaccines for the prevention and treatment of HIV, the causative agent of AIDS.”

Mr. Abalaka said he is prepared to move on after 16 years of legal hurdles although he feels pained that millions of people should have benefitted from his discovery.

He said his attempt at finding a way forward in fighting the HIV pandemic came after attending a World Health Organization-sponsored workshop in 1974 in Geneva.

The WHO workshop formed a solid foundation of the conception of his innovation for safe and effective HIV vaccines.

He recommended that a national or state emergency vaccination programme for HIV control be created. He said the agency must be completely independent directly under the presidency or the state governor. The agency, he said, should also be funded by the Nigeria government in collaboration with private sector contributors.

Mr. Abalaka, 67, said for the past 16 years while facing various lawsuits, he took to golfing as leisure, and spent most of his time taking care of other personal ventures.

He also said he is happy that after 16 years of the suits, the judiciary had come up to support his efforts and berate the Nigerian government for their irresponsible manner which it handled his discovery.

A Federal High Court in Makurdi in November ruled against the ban on the controversial HIV vaccine developed by Mr€. Abalaka.

The judge ruled that the Federal Government was wrong to have banned Mr. Abalaka’s vaccine.

In 2000, the Olusegun Obasanjo administration suspended the use of all drugs or vaccines claimed to be used for the prevention, cure or treatment of HIV/AIDS until proper guidelines are approved for the assessing and verification of the claims.

The court in its ruling then said there was no evidence that such guidelines were put in place after 15 years. It said the ban on Mr. Abalaka’s vaccine was done arbitrarily and therefore illegal, null and void.

However, it said Mr. Abalaka could only administer his vaccine with patient’s consent.

“Since the government is not doing anything to help them (the HIV patients), it is only proper for the persons so infected to have a right to decide for themselves whether to use Abalaka’s vaccine or not,” the court ruled.

Mr. Abalaka sued FG and the Attorney General of the Federation over the ban on his vaccine, however, National Agency for Food and Drug Administration volunteered to join the defendants in the suit.

The immunologist argued that his vaccine, made from “pure” human blood does not fall under the jurisdiction of NAFDAC which regulates drugs made from animal and chemical substances.

The court also noted that the desperation surrounding HIV disease is like that of the deadly Ebola Virus Disease, EVD which in turn required desperate measure like the transfusion of blood of survivors.

It also said that the Nigerian government and NAFDAC have failed to provide cogent reason for the ban or give evidence of any negative side effect of the vaccine.