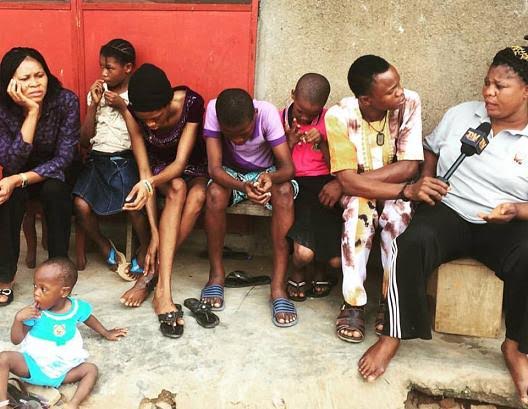 Sunday 29th May, 2016 was not a normal one, but it was a day of deep pain and mourning for the family of Roseline Sougie who was allegedly killed by her husband on Friday 27th May, 2016.

On a condolence visit to Ikorodu, the President of Women Arise, who was terribly heartbroken regretted the colossal loss; she however, condemned in strong terms the act of resorting to violence which is totally uncalled for, Roseline throat was slit and we must ensure adequate investigation is done to truly reveal how the perpetrator carried out this dastardly act.

She assured the family that the organization was in contact with the police, wish Jafaru who drank poisonous substance quick recovery so as to face justice, also awaits the report of the autopsy on Tuesday (today) while pledging to be part of the wake keep for the slained woman on Thursday.

Welcoming the team, Ms. Philomina Shaibu, immediate younger sister of the victim, stressed how her late sister “was a workaholic but on suspicion of infidelity and Jafaru feeling not secured has always brutalized the wife that last year while Roseline was sleeping the husband used a pillow to cover her mouth and she almost died, later fled to the village but the killer husband went to beg her again and they eventually reconciled after three months”.

Richmond Sougie 16 years, victim 2nd son, also narrated how he heard his father call his name from sleep around 4am, “My three siblings, Aunty Vero and I slept in the sitting room while dad and mum were inside sleeping with my two younger sisters’. Around 4am Friday morning, dad called me from the bathroom. I went to meet him but he did not say anything. I went outside to urinate and when I came back, I checked the bathroom and saw him lying down on the floor, vomiting some black substance and excreting on his body. I suspect he poisoned himself. I told my aunt to wake mum up to attend to him. But she kept calling her name, so I quickly joined her but she didn’t wake up”.

“Vero victim’s younger sister who has lived with them for three years said “I shone a flashlight on her and saw blood on the bed with a wide cut in her neck. I developed cold all over my body, my wrapper fell when we discovered she was dead. We later asked dad how it happened, he said God will punish me, later he said somebody entered and did it whereas the compound gate is always locked in the night and it was even Richmond that unlocked that door before urinating outside about 4am”.

Before departing the Ikorodu residence of the bereaved, the President, Women Arise, Dr. Joe Okei-Odumakin, finally said, that Women Arise stands with the family at this time of grief and optimistic that their breadwinner, mother, aunty, sister, Roseline will get justice.

Pix: L-R: Women Arise, President, Dr. Joe Okei-Odumakin; Happiness, the last child of the victim; and Vero, the sister’s victim, narrating how she discovered the lifeless body of her sister on Friday morning.