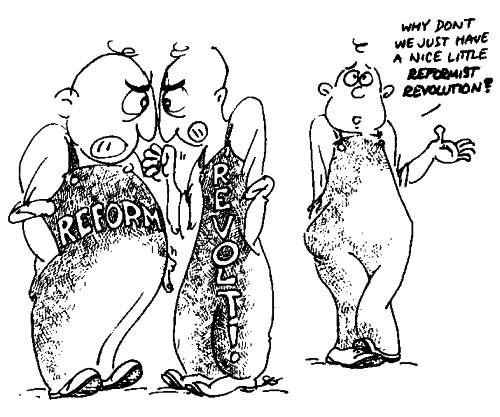 The tragedy of backward countries in the present epoch is the fact that their capitalism did not start internally nor was it even from the very beginning consistently progressive. Backward nations and societies were forcefully drawn into global market as part of the rise of monopoly capitalism i.e. imperialism. And by “force” we mean not just imperialist armies and fire-power, which came relatively late, but also the force of commodity trade on a world-scale and its revolutionizing influence on feudal property relations in backward countries.

In Nigeria, the above historical process created a country which is historically passing through the stage of bourgeois democratic revolution the major tasks of which were never accomplished. Economically and from an internal perspective, the country’s capitalism is primitive.

There is very narrow industrial base, agriculture is still predominantly peasant-based and employs primitive tools, there is no clean and adequate water supply, electricity is erratic, roads are in extremely bad shape, life expectancy and literacy level is very low and maternal and child mortality rates are among the highest in the world. Politically, the task of national unification was never accomplished as there is no national market, elections are neither free nor fair and violence, ethnic/religious mobilization and vote-rigging are common means of acquiring power.

However, on a global level, the country is home to a couple of advance technology. However, economic sector remains dominated by Western monopoly oil companies. A corresponding political relationship is that the country’s leadership is a rentier bureaucracy which often takes orders from imperialist centres in London and Washington.

Primitive internal capitalism side by side with advanced technology; a belated bourgeoisie subservient to Western imperialism; these are the essential features of Nigeria’s politico-economic system.

In such a country like ours, the vast majority of the population are peasants in the rural areas and urban-dwelling small traders and artisans. These heterogeneous groups are collectively called the petty bourgeoisie or small property owners. They occupy a middle position between the big bourgeoisie and propertyless wage-earners (proletariat). The exploitation suffered by this petty bourgeois layers has unique outcomes for the class.

While exploitation of the proletariat by the big bourgeoisie forces the former to organize in various trade and labour unions and essentially strengthens the class, exploitation of the petty bourgeois by big bourgeoisie has the opposite effect; it disintegrates this middle layer, crushes it into non-existence and destroys its small property. Demolition of slumps and markets and banning of commercial motorists (like Okada) are some of the expressions of this destruction and disintegration of petty bourgeoisie by the big capitalists.

In a situations like Nigeria’s, where the bourgeoisie had failed to carry out even the most basic of bourgeois democratic tasks like free election, qualitative public health and education, modernizing agriculture and development of industry; in a country with such a belated bourgeoisie, couple with a working class not even having a strong party of its own not to talk of capturing power and reconstructing the country on a socialist basis; with such given conditions, a life of near-barbarism is inevitable and no class is more vulnerable than the unorganized and disintegrated petty bourgeoisie (the peasant, artisan and small trader). Civil society activist and NGOist consciousness reflects this very impotence and helplessness of the petty proprietor classes in the face of crushing domination and exploitation by the big bourgeoisie.

The civil society’s and NGOs’ claim of being non-governmental and non-profit is both a protest against and an attempt to hide the dependence of the petty bourgeoisie on the bourgeois bureaucracy and big corporations.

The avoidance of explicit quest for political power and denial of class struggle in the society reflects a class which cannot carry out an independent political action but also reflects an attempt to derail militant class activism of labour and youths organizations.

The idealistic pasture of charity and advocacy flows from a class whose material existence is under the most brutal of attacks from a big bourgeois who are at the same time its sponsors. In essence, civil society activism and NGOism claim to be non-governmental and non-profit to protest or hide their dependence on bourgeois governments and big capitalists, which it depends on for survival, as well as ruining it.

In the final analysis, NGOism is the utopia of the petty bourgeois who aims at re-storing community values and humanity mercilessly destroyed by modern capitalism. And this aim is pursued outside the real struggles between various classes! From the perspective of the person whose small property is destroyed and his class annihilated, this utopia is inevitable. It is only the proletarian who, while being as mercilessly exploited by bourgeoisie, occupies a strategic position in the capitalist mode of production as the producer of all wealth in the society and is armed by this same system of exploitation with the organizational tools of fighting it i.e. trade and labour unions and other proletarian organizations

NGOism and the Struggle between the Nigerian Bourgeoisie and Proletariat; the Role of Joint Action Front (JAF)

Just as NGOist consciousness reflects the economic, political and organizational impotence of the petty bourgeoisie, this very weakness reveals itself in the arena of the struggle between the two great modern classes, big bourgeoisie and proletariat. Despite the non-class non- governmental and non-profit ideological stand of civil society activism and NGOism, these petty bourgeois tendencies are inevitably and necessarily drawn into political struggles between classes.

What role does NGOism plays in the struggle between classes in Nigeria? NGOism, true to its petty bourgeois nature, lacks political independence and ultimately relies on either the proletariat or the bourgeoisie. Often these two major classes fight over the soul of NGOism. Joint Action Front (JAF) is a concrete manifestation of the effort of proletariat (through its ideologists) to win over civil society to its side. JAF is explicitly an umbrella for pro-labour civil society organizations.

The Kano State Civil Society Forum, which emerged out of January Uprising last year as a coalition between civil society organizations and NLC Kano, is also part of this left-ward shift of NGOs. But the bourgeoisie and imperialists are also working hard to win more and more layers of NGOs. NGOism plays the role of hiding the class nature of Nigerian society thereby diverting the movement of youths and intellectuals to harmless civil society activism which seeks change within the confines of capitalism. It must, however, be said that NGOs that are ethnic and religious based are deliberately setup and funded by Nigerian bourgeoisies and the western imperialist to divide workers and poor and derail a united action by the Nigerian masses. NGOs, together with opportunistic NLC bureaucracy, are the main obstacles to the genuine spread of idea of Marxism among the working class and the youths.

The same way NLC bureaucracy limits the struggle of Nigerian workers to economic arena (by refusing to build workers’ party), NGOism limits the struggle of youths and petty bourgeois masses to harmless non-class civil society activism. Marxist organizations in Nigeria, especially our tendency, Campaign for Workers’ Alternative (CWA) have been agitating for an independent party of Nigerian workers, something NLC bureaucracy has been avoiding, fearful of an extra-ordinary potential inherent in this. Emergence of JAF and its sustenance is a manifestation of the efforts being made to win over youths and petty bourgeois layers (so-called civil society) to proletarian class viewpoint. These efforts only need to be multiplied a million times.

•No to Political Indifferentism!

•No to Class Collaboration!

•For the Leadership of Nigerian Proletariat in the Democratic Revolution!