Typically ‘knock-out’ mice have been made and used for biological experiments, by reconstituting and genetically introducing embryonic stem cells into a mouse embryo. This simple procedure did not work in primates as the embryo ‘rejected’ the introduced embryonic cells. 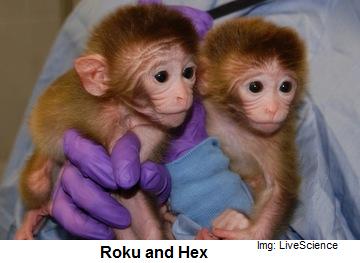 The scientists at Oregon however discovered that taking ‘totipotential’ cells, cells a bit more determined than embryonic cells.

Compare- not yet knowing what you want to become(embryonic) and being able to be whatever you wanted to be- like babies, to school pupils(totipotential) with some level or pre-determination, but still manipulate-able into any other/another specialization.

The scientists at Oregon discovered that success in fusing primate cells worked with the more ‘more potent’, totipotential cells.

“The cells never fuse, but they stay together and work together to form tissues and organs,” said Mitalipov of the institute. The research was published in the journal Cell, January 20 issue.

Cells from six different monkeys(six genomes) were combined to make this new ‘specie’, the three monkeys.

Think about the possibilities?

Will we soon see more recombined and re-constructed primates?

When will the first Mammoth be brought back to life- by implantation of perhaps its ‘reverse developed’, mature adult cells into the totipotential stage and introduction of these into an elephant embryo?

Related: DigitalJournal- Scientists to bring mammoth back to life from cloned bone marrow

Think ‘Green Lantern’, fluorescent genes have been introduced into so many species of organisms, but how soon are these green fluorescing animals going to run around our sewage systems and even pop up as new employees and classmates?

‘Designer babies’ are already being made, whereby the parent selects what genes he wishes implanted and knocked out in his child.

It’s no  longer wild imagination, it’s as wild as imagined!