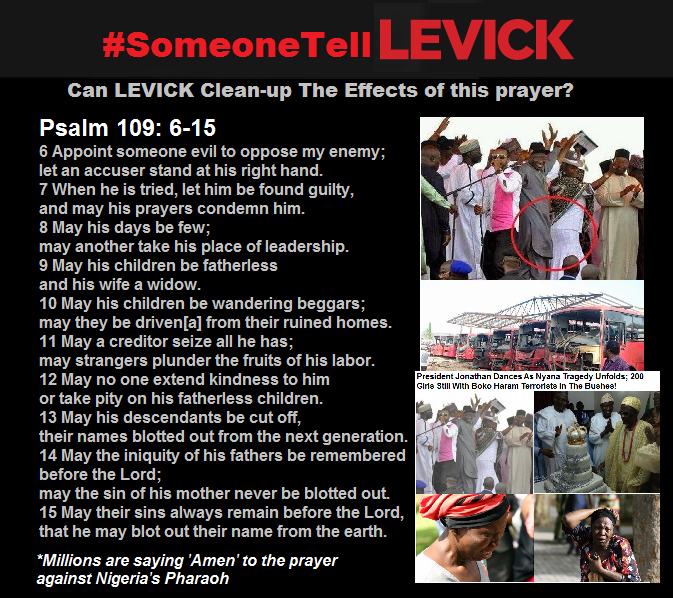 In Nigeria, backlash against U.S. firm hired to improve image

Someone tell Levick that Nigeria is, you might say, complicated. Nigeria’s Twittersphere erupted Thursday under the hashtag #SomeoneTellLevick over a government contract signed with U.S. public relations firm Levick last month — reportedly for $1.2 million — to improve news coverage of the Nigerian government’s efforts to recover 219 abducted schoolgirls.

So far, Levick has succeeded in getting some prominent media placements for embattled President Goodluck Jonathan, such as an opinion piece in the Washington Post last month.

It also succeeded in upsetting a lot of Nigerians.

The furious backlash over Washington-based Levick’s involvement reflects long-held sensitivity about foreigners who think they know more about Nigeria than Nigerians. Some accused the firm of profiting from the abductions.

“How can @LEVICK earn filthy income on the back of innocent women (&men) that have STOOD EVERYDAY for 78 DAYS DEMANDING: #BringBackOurGirls?” tweeted former Education Minister Oby Ezekwesili, one of the main organizers of the #BringBackOurGirls campaign, whose work has attracted global attention to the fate of the missing girls.

The girls from the Chibok area in northeastern Nigeria were kidnapped by the militant group Boko Haram in mid-April. According to Human Rights Watch, Boko Haram killed more than 2,053 Nigerians in the first six months of the year. Villagers in the northeast complain that the country’s military rarely protects them from the militant attacks.

Boko Haram is bitterly opposed to secular education, democracy, Western culture, banking and taxation; and it wants to impose an Islamic state across the country of 170 million, which is divided between Christians and Muslims. It has launched a series of bombings in urban centers in addition to attacks on villages.

“We dont need some PR company from DC to tell us how our govt feels about us. we live here, you operate from DC @LEVICK enjoy your lunch fee,” read a post from @Perseverance__.

“Seriously hoping that by the time we’re done with @Levick, it will itself be needing to hire a PR firm to change the narrative,” tweeted @dodoshyne.

Some Nigerians demanded Levick give back the money it was earning from Nigeria’s government through the state-owned News Agency of Nigeria, which reportedly signed the contract.

Victor Ovedhe wrote that the Nigerian government was fond of “wasting our resources @levick pick your cash & go, it’s call ‘National Cake’ we feed foreigner even when citizens are hungry.”

Many Nigerians tweeted that Levick was responsible for a “smear” campaign against the #BringBackOurGirls activists, describing them as terrorists. Ezekwesili wrote on Twitter that the firm was “evil”.

“It’s to SUCH HATE? That our Presidency deployed our public resources to hire US firm @LEVICK to label INNOCENT CITIZENS “terrorists”??” she tweeted Thursday.

Ezekwesili was responding to a blog by Nigerian columnist Tolu Ogunlesi claiming that Levick was responsible for a statement attributed to Jonathan that criticized some members of the #BringBackOurGirls campaign. The statement was released after parents of the missing girls canceled a meeting with the president Tuesday because they didn’t have enough time to get to Abuja, the capital, from Chibok.

“Unfortunately, political forces within the Nigerian chapter of Bring Back Our Girls have decided to take this opportunity to play politics with the situation and the grief of the parents and the girls. They should be ashamed of their actions,” the president’s statement said. “Those who would manipulate the victims of terrorism for their own benefit, are engaging in a similar kind of evil: psychological terrorism.”

With close elections expected next year, Jonathan and supporters say the #BringBackOurGirls campaign is political, a claim the group denies. Government politicians have also asserted that political opponents are funding Boko Haram.

Conspiracy theories, some wilder than others, abound about Boko Haram’s financial support and the reasons for the failure of the military to stamp out the insurgency.

A spokeswoman for Levick did not comment on whether the agency helped craft Jonathan’s statement about the #BringBackOurGirls campaign. The company released a one-paragraph statement saying, “As the world witnesses the brutality of Boko Haram, and its cowardly tactics of using children as pawns in their terrorist campaign, LEVICK’s only mission is assisting the Government of Nigeria with its number one priority — the rescue of the girls and combating terrorism.”

Levick prides itself on crisis management for companies and nations. Its website says, “Every company is or will be in crisis. Those that answer the call transform a PR crisis into an opportunity. Those that don’t, risk everything.”

Ogunlesi, writing in Nigeria’s Punch newspaper recently, said Levick was “merely the latest in a long line of Western image consultants that Nigerian governments have been known to routinely engage for miracle-working purposes.”

He wrote that the worst problem for Nigeria’s image was Jonathan’s cringe-worthy performances in interviews and meetings with international players.

“The Internet has turned many citizens into fairly powerful purveyors of opinion. By sheer force of will, ordinary Nigerians armed with mobile phones and immobile frustrations are able to powerfully … shape their country’s international narratives in a way no media or PR behemoth could possibly hope to counter.

“Meanwhile, our government is still busy working according to old scripts, hiring PR consultants whose efforts are either not needed, or doomed, from the beginning, to end in failure,” he wrote.

“One seriously hopes these American narrative-shapers have some understanding of Nigeria beyond Wikipedia and government messaging. One also takes it for granted that they know that the people who actually have the power to shape the Nigerian narrative are the ones who employed them.”

Lanny Davis, a Levick executive, told the Washington online publication the Hill that Jonathan’s priority was to recover the girls and that “there’s got to be a way to amplify what he’s saying and doing to find these girls because over here in America, we’re not hearing much about his effort.”

But Ogunlesi wasn’t impressed. “I wonder how willing the consultant might be to concede to this argument: that perhaps the world is not hearing much about any efforts to rescue the girls because there are really no serious efforts going on,” he said.