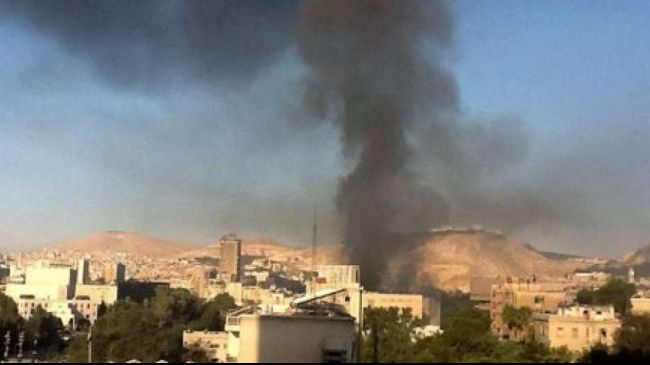 NIGERIA AND AFRICA ARE SPECTATORS, AND NOT ACTORS, IN INTERNATIONAL POLITICS

NIGERIA SHOULD BREAK UP DIPLOMATIC RELATIONSHIP WITH ISRAEL!!!

DO YOU KNOW THAT JONATHAN BADLUCK HAS JUST WARDED ISRAEL A $47 MILLION CONTRACT TO SPY ON NIGERIANS!!!

First, the major mistake most of us make is that since it is Syria which is far away from Nigeria and/or Africa, then we are safe, it’s none of our business and we should not intervene. However, what we forget to understand is that in these days of modern technology and with the advancement in ballistic missiles, a rocket could be fired into Aso-rock right inside the bedroom of  jonathan badluck from any part of the world. We live in a global village and the world is much smaller than we might be might be thinking. For example, the US or Israel could fire rockets/missiles to any part of Africa from a war ship stationed in neutral water. What many of us also fail to take into consideration is the fact that both the US and French have military bases in a number of African countries which they can easily use to launch attacks on Nigeria or any other African country EASILY.

And in case you have forgotten, then, I would like to remind you that Israel had once raided an African country, Uganda, without any approval from the African Union. We need to bear it in mind that if Israel is allowed to go Scott free without any rebuke/punishment/sanctions for bombing a Sovereign country under the pretext or some cock and bull story that it ‘suspected’ that ammunitions meant for Lebanon are been stored in Syria, tomorrow, there is a very high probability that it will be the turn of Nigeria. There is nothing stopping the Israelis from bombing Nigerian cities: Kano, Kaduna, Maiduguri, Borno, Sokoto, Katsina etc under the pretext that Boko Haram terrorists are hiding ammunitions there. If not the Israel, then the French, Americans or British can launch a military attack on any African country and all we can do is watch helplessly because we have compromised ourselves and did not speak up when other countries were being bombed.

Thus, silence on the path of Nigeria and African Union is nothing but endorsement of ISRAELIS AGGRESSION, VIOLATION OF INTERNATIONAL TREATIES, SOVEREIGNTY OF SYRIA AND DESTABILIZATION OF THE MIDDLE EAST and most importantly, a DIRECT MILITARY ASSISTANCE ON THE PART OF WESTERN COUNTRIES IN SUPPORT OF THE REBELS trying to topple a legitimate government. Nigeria as a country has been a lame duck for decades as far as international relations is concerned. Nigeria lacks a well-defined foreign policy. In all cases, we play along with the script written by these so called Western civilized countries who are nothing but aggressors and international bandits that use force to defend their so called economic interests at the expense of developing countries. Israel is fond of violating international and human rights laws, kidnapping and assassinating of foreign citizens all over the world and attacking Sovereign countries all in the name of protecting its citizens and country.

Moreover, suffice to say that Israel has never been a friend of Nigeria and Africa. Over 60 Nigerians with their families and under-aged children were randomly rounded up and deported by Israel under some flimsy excuses despite the fact that they had valid documents to live in the country. Israeli police also arrested the wife of Ghana ambassador while shopping in Tel Aviv. Israeli government have been very hostile to Nigerians in particular and their rights are violated regularly. The Nigerian embassy in Israel has never lived up to its responsibility of protecting the lives and interests of Nigerians. Instead of the Nigeria government calling the Israel government to order, jonathan badluck rewarded them with a $47 million network contract to spy on Nigerians through the internet by breaking into their mails. We are doomed!!!

Unfortunately, Nigeria’s Foreign service which is being headed by Gbenga Ashiru, another incompetent opportunist, who goes around smiling and speaking big big grammar. Whenever I see the picture of gbenga ashiru, the picture of 15th century Ijebu/Egba slave trader comes to my mind – VERY USELESS FOREIGN MINISTER! In a normal circumstances, what one expects Nigeria, South Africa and the African Union to do is to speak with one voice in condemning Israelis aggression and take the case to the United Nations to sanction Israel. But, these so called diplomats and leaders have sold our independence for a pot of porridge. How does one expect Gbenga Ashiru who was FULL OF SMILE after wining and dining with John Kerry, the new US Secretary of State, to speak up against the US and/or Israel on our behalf? This is the heavy price that we are paying for having incompetent, vision-less, corrupt and morally bankrupt opportunists like Gbenga Ashiru, jonathan badluck, Ngozi Iweala, Segun Aganga, Dezanie Allison-Madueke as our representatives. That is why I keep on saying that THERE IS NO HOPE FOR THE BLACK MAN. WE ARE DOOMED. Nobody respects us nor take our opinion into consideration. Decisions are taken on our behalf and we are just put before the facts/reality and expected to co-operate and play along.

The Syrians, Iranians, Arabs command much respect than black people. WE ARE MONKEYS AND THE MOST INFERIOR RACE IN THE WORLD.