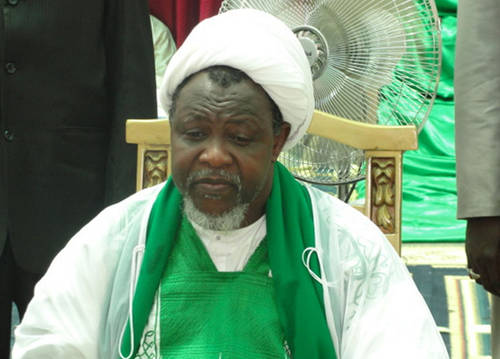 While the crackdown on the Islamic Center on the morning of the 12th December and the following stick and gun wielding so-called Shia Youth that barricaded the road against a military incursion may seem a random event, perhaps it is not. The Zakzaky movement has denied those who carried sticks and stones. What is most thought provoking in what you read below, is not the exact steps that allegedly triggered the chaos, but the clarity with which Sheikh Zakzaky predicted the recording of it and the subsequent events after the “clash” is triggered. From the deliberate and excessive-force, shut-down Shia Islam response of the Nigerian army, it appears as though they were playing the very script.

By Citizen Reporter, SaharaReporters on Oct. 2, 2014

Leader of the Islamic Movement in Nigeria, His Eminence Sheikh Ibraheem Zakzaky yesterday has expose a sinister plan to cause violence in the city and to forestall it.

At the end of the study session, Sheikh Zakzaky disclosed that he arrived much earlier than his usual time acting on a tip over a sinister plan by the Nigerian military to infiltrate the Movement and kill unsuspecting soldiers which will justify official clampdown on members.

The plan, according to him, was that some armed soldiers would wear Hurras (Guards) traffic control volunteers’ uniforms, and would open fire on unsuspecting soldiers passing by. “While this is happening, they would have their camera ready, filming it and later blame it on ‘Shi’ites’. They would then begin manhunt and indiscriminate shooting of people”.

He further disclosed that, “the unsuspecting soldiers (the target) in four vehicles comprising 60 soldiers in each, 2 Hilux vans, Jeep and an ambulance had actually arrived Leventis roundabout, scene of the planned shooting, disembarked with sign of hostility, but a sudden heavy downpour foiled their plan. They had to walk away disappointed as the situation was becoming uncontrollable”.

Sheikh Zakzaky said, the Hurras traffic control volunteers were earlier asked to withdraw and he also changed route, which left only the disguised soldiers visibly identified at the scene, and therefore had to quickly leave in full disappointment.

He explained that the security operative had been contemplating covert operation on the Islamic Movement, until late July this year when they became anxious and opened fire on Quds Day procession which they later regretted.

“Having failed and shamefully exposed before the world in the last onslaught, they now resorted to their initial plan of infiltration or using some members of the Movement as agents to shoot at soldiers and attribute it to ‘Shi’ites’”, he added.

The Islamic Leader said, all machinations of the enemy will fail in the face of growing peaceful conduct and public respect of the Islamic Movement over years. “Our weapon is positive reasoning, truth and good conduct. Guns are for the reckless and foolhardy. We have been conducting our affairs peacefully, calling people to the truth for the last 36 years. So you cannot come overnight and attribute violence to us, that we now resort to killing people. This is impossible. We save lives, not kill them”.

He called on people to use their sense of judgment in the face campaign of calumny being hatched by the Nigerian security operatives against the Islamic Movement. “If in the nearby future you hear of any exchange of fire between the ‘Shi’ites’ and security operatives, it is not true.

Sheikh Zakzaky also lamented situation whereby lives of innocent soldiers were being deliberately lost in the name of faceless Boko Haram to satisfy Isreali and United States interests. ‘Their masters never cared how much lives of Nigerians are lost, as long as they can actualize their selfish interest”.

The Nigerian security operatives, he said, had been on constant plan on how to forcefully wipe out the Islamic Movement. “Know that you can never play this on us and succeed, because we have many years record of peaceful conduct that cannot be disputed. We have images and videos of your atrocities, bring forth evidence of an instance where we killed people”, he challenged