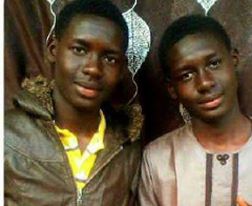 On the 6th of February, 1997 I visited my sister Amina and I saw her on praying mat in an unusual mood.I asked her what was wrong? I categorically remembered these statements from her: “I think I’m about to have a baby, can you help me up, and tell our mother that  I’m about to be blessed ”.

She was taken to hospital and after couple of minutes 45, 50+ I can’t remember exactly but it was not up to an hour I was told that my sister gave birth to male twins.

I was so happy looking at them smiling, one would smile, later on one would cry the other would smile, one would yell and the other would sleep. My sister was happy together with her husband and our mother, father and our maternal grandmother Dada was there singing for them “Hasan na Husaini magada Girma, Hasan na Husaini tsuntsaye masu fiffiken tashi” in Hausa language. Meaning Hasan and Husain are descendants of bravery, Hasan and Husain are birds that can fly.

I remember my father mentioned these words to Amina my sister in English “Twice as much to love, two blessings from above”. Today 6/02/2016 is the 19th Birthday of these beloved nephews of mine- Hasan and Husain both just got admission into University.

But, I cannot see them because both were innocently massacred by the Nigerian Army under the command of Lt. General Y.T Burutai on the 13th of December 2015. Lt. Col Usman Kukasheka said the COAS Burutai convoy  was blocked at Husainiyya Bakiyyatullah when brothers and sisters had converged at Husaniyya to celebrate the Birthday Anniversary of our beloved Prophet Muhammad(S).

If COAS was blocked at Husainiyyah as Kukasheka stated, Allah knows the ‘behind- the- scene’ of that blockade  but, Lt. Col. Usman Kukasheka I want you to know that , MY NEPHEWS WERE AT GYALLESU MILES AWAY FROM HUSAINIYYA BAKIYYATULLAH how comes they were massacred and burnt at Gyellesu? Was there another road blockade as well?

Happy birthday to you my massacred nephews my heart bleeds for you . We demand Justice. Allah will never let blood thirsty monsters to live in peace.