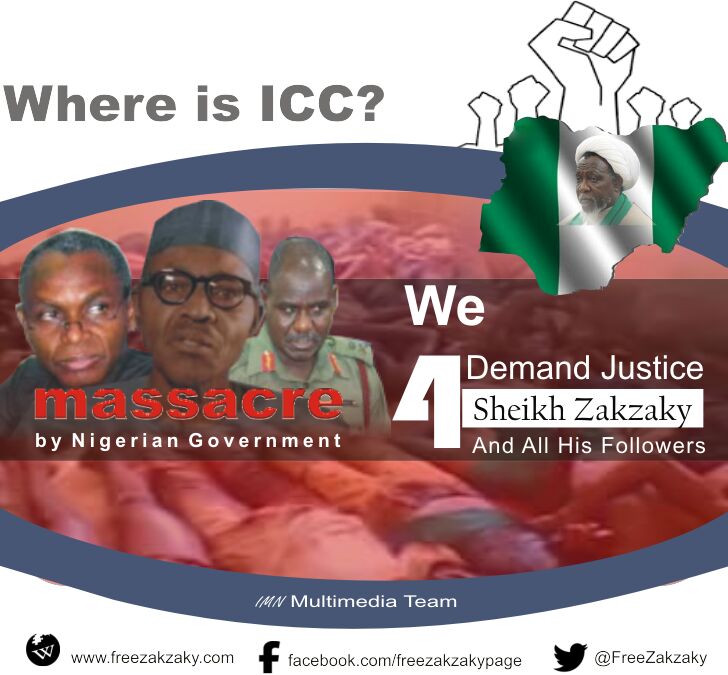 The brutal Zaria massacre by the Nigerian army that killed close to 1000 defenseless and unarmed Nigerians will go down in history as the most barbaric, inhuman and wicked mass-murder that was masterminded and executed by the highest-ranking Nigerian government officials to serve an evil foreign imperialist agenda that has the savage Saudi regime as a front.

After the occurrence of these two happenings the Nigerian army that is a front for the Nigerian President Buhari who from credible information ordered the inhuman Zaria massacre, the corrupt Northern Nigerian elites and the bloodthirsty Nigerian Wahhabi clerics, went on the defensive to limit the damages done by these important revelations.

Before then they were sponsoring mushroom “human rights groups” to organize protest to the Iranian Embassy and to try to link the peaceful Islamic Movement in Nigeria (IMN) under the leadership of His Eminence Sheikh Ibraheem Zakzaky to terrorism and violence. They launched a massive smear campaigns of calumny and demonization to portray the peaceful #IMN as a “violent extremist group” that should be proscribed and banned.

Then these disclosures occurred and the dance of Shame of the masterminds and perpetrators of the Zaria massacre changed as confusion, division and panic started emerging from their ranks. It was a criminal foreign-sponsored agenda to kill Sheikh Zakzaky and crush the IMN by assassinating its leading lights and they wounded Sheikh Zakzaky and succeeded in assassinating some of its leading lights using professional Snipers during the Zaria massacre.

After the disclosures of the mass Graves and the Amnesty International report then the image laundering campaigns began and the futile efforts to manufacture scapegoats for the Nigerian army authorities who supervised the brutal slaughter of defenseless Nigerians also began. A freelance Journalist Yusau A. Shuaib was recruited to write an article “Gen. Buratai:An encounter with soldiers’ soldier” glorifying the Nigerian army Chief Buratai and manufacturing all excuses to shield him from taking direct responsibility of the massacre. The writer was clever enough to shift most of the blame to the Kaduna state Governor Elrufai who “betrayed” the understanding that “only 7 Shiites were killed and 10 others injured” as claimed by the Nigerian army Chief.

Then another non-starter in Journalism going by the name “Clement Ejiofor” was recruited for the image laudering program and wrote an article titled “Army, Shiites clash:The untold narrative”. In this article the bashing of the “beyrayer” Kaduna state Governor Elrufai continued where all the destructions of the physical evidences of the Zaria massacre where placed on his door step exonerating the Nigerian army. The writer also tried to magnify the fraudulent claims that IMN is “violent” without as usual providing any instances of such claims or statistics to back up such claims.

Then the recent news report by the NewsRescue Editorial team of a Classified Intel report of the latest move by the Nigerian army to deflect the responsibility of the Zaria massacre to #BokoHaram and implicate Kaduna state government officials that included Governor Elrufai. Excerpt from the NewsRescue report states:

“Leaks from highly classified intelligence meetings by the Nigerian army detail a plot to frame Boko Haram in the Zaria massacre incident that saw as many as 750 Shia minority Muslims and other passersby and religions’ victims killed. Members of the Kaduna state government will also be framed, the sources allege. Possibly including the Kaduna governor, Nasir el-Rufai who the army is upset with for having suddenly ‘broken file’, revealing the numbers of bodies buried in Mando against prior agreement. El-Rufai however as gathered, only grudgingly confessed on the Mando mass grave after he had been informed that Amnesty International was already onto it; had sent officials to inspect the site and was preparing its damning report.”

The Nigerian army Chief Buratai is doing all these on behalf of the Nigerian President Buhari who from credible information gave the order for the brutal slaughter of close to 1000 peaceful Nigerian Shia Muslims that included hundreds of women, children and the aged and dumping the dead bodies in mass Graves. The Nigerian army Chief is desperately trying to do the impossible and that is burying what is undoubtedly a war crime. Nobody in history has succeeded in burying a war crime and Nigerian President Buhari will never be an exception to that rule.

On a final note, the Nigerian military and political leaders should understand that the Era of massacring innocent Nigerians by the Nigerian army and attributing such massacres to “unknown soldiers” is over for good. Hopefully the brutal Zaria massacre will be the last of its kind in Nigeria where heavily-armed soldiers will decend on defenseless civilians and mass-murdered them and then wickedly buried them in mass Graves to bury the evidences.