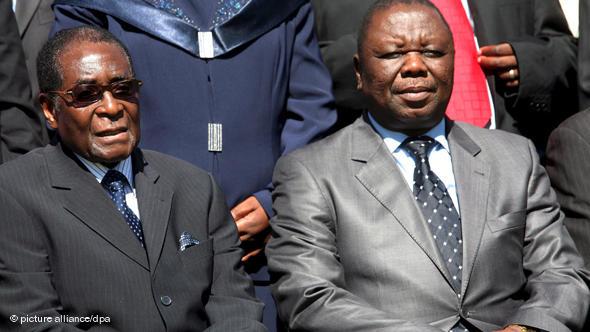 An analyst says the MDC party in Zimbabwe is softening toward the idea of local indigenization pushed by Zanu PF that would weaken Western corporate control.

In the background of this, Zimbabwe is setting in motion plans for elections this July. The previous election much like in Kenya, led to a violent stalemate, which created the current coalition government of Mugabe’s Zanu PF and the Movement for Democratic Change (MDC). Zanu PF has changed over time from its opening stance to one that is about self-determination and being anti-imperialist, not wanting to be exploited by Western corporations. The West has responded against this disobedient display by applying economic sanctions against the Mugabe government. Indigenized policy promises a 51 percent stake to the people of Zimbabwe on everything from foreign-owned banks to mines and other operations. Opponents to this say it would drive away foreign investment.

Press TV, in its Africa Today program has interviewed Thamsanqa Zhou, lawyer and political commentator, London about this issue. Joining him is Chofamba Sithole, African journalist from London and Lance Mambondiani, development economist from Manchester. The following is an approximate transcription of the interview.

Press TV: What are your thoughts. This sounds brilliant on paper. Do you think Zanu PF can actually make it happen?

I agree with Chofamba, this is not a new thing in Zimbabwe. When Zimbabwe became independent in 1980 Joshua Nkomo who was the father of Zimbabwe or who is still considered as the father of Zimbabwe, at that point spoke about indigenization; spoke about the land issue. But at that point the western-favored party was Zanu PF and Robert Mugabe who was the darling of the West at the time, and they said “no”.

And what is interesting now in the case of Zimbabwe, the Westerner favored political parties like the MDC (Movement for Democratic Change) are saying “no” using the same voice that Zanu PF and Robert Mugabe were using in 1980 when Zaboor was saying this is what needed to be done then.

But Zanu PF, when they were put under sanctions, they immediately realized that they needed to domesticate the capacity to hold the economy because the West simply pulled the plug and the entire economy went into a spiral downward – when they wanted to give the ex-combatants compensation in 1997. So that is simply what happened.

So, Zanu PF learned that without domesticating the means of production you are vulnerable to the forces that are external.

The MDC say that there is nothing to lose at the moment in opposing it, but if you look at their behavior in so far as the Constitution, the new draft Constitution, is concerned, they have put things in there that cement these varied indigenous policies – including that of land and even agreed that land must be acquired by the government without compensation, which is something that most white farmers are not happy with. But the MDC are not saying anything about that, but they were sitting at the table.

So I don’t believe that the MDC are opposing indigenization. What they seem to be talking about now is that they are not happy with the way it is being implemented.

Press TV: What are your summary thoughts as you look at how this whole election has been portrayed particularly here in the West?

Zhou: I think what is interesting is there hasn’t been much coverage on Zimbabwe in terms of the election this time round unlike what has been happening in the past. I also believe that a lot of Zimbabweans both on the ground and those that in the diaspora and Africans in general are looking at the credibility of these policies that are inward looking.

It’s sad to say, but I slightly disagree with Dr. Mambondiani in that if the capacity to look inwards is not there… You can see even here in Britain the government is trying by all means to make sure that local investors put their money – because they are keeping it and they are holding it.

I believe that Zimbabwe can generate that capacity and one example in particular – Joshua Nkomo, before he died, he gave Zimbabwe an example of indigenization because he gave a license for the mobile phones to Equanet… Today Equanet is one of the biggest contributors to treasury in terms of taxes in terms of employment.

So that‘s just an example of a company that was given a license – because Dr. Nkomo could have said no, you are too small there is no foreign-direct investment, I want Vodafone and all these other companies to come in instead. But he didn’t do that. So I believe Africa should be looking at generating that capacity from within…

Press TV: And giving confidence to entrepreneurs in Africa itself…

Zhou: It is not true, it is absolutely not true that Zimbabwe doesn’t have foreign direct investment because of the indigenization policy. It is because like Chofamba says it is the confusion in government. You can’t plan with a government that says one thing today and another thing tomorrow. One minister says one thing today…

Press TV: This obviously seems to be something that is a work in progress; it’s a healthy discussion; and it’s empowering as an idea for Zimbabweans.

Do you think that between now and the election is the right time for fine tuning on these question marks raised by Chofamba and also by Dr. Lance?

Zhou: I think so because the election gives the country and Zimbabweans an opportunity to discuss these things.

My worry is not really about even implementation. My worry is that the government that we have is… We’ve got glory politicians – people who want medals and who want to win things like peace awards or something to say I am the one that did it. So they oppose things that they agree with just because the person who is behind it is the wrong person and they must not be getting the glory.

But it is the mining company itself that must choose those partners. So for anyone that turns around and says, ‘it’s going to go to some cronies’, it’s not true in terms of what’s happening on the ground. But the people are not being told that because the person that’s doing the project is the wrong person. We would all stand up and support this if it was a Western minister or something like this.