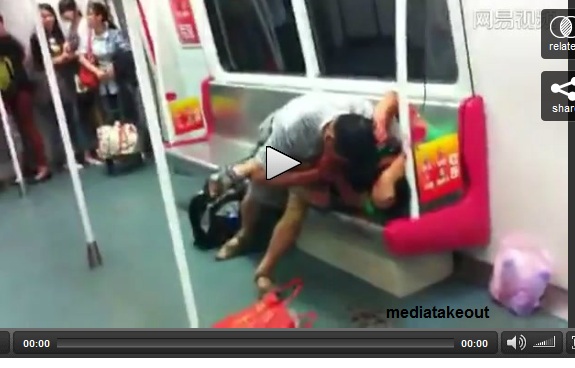 NewsRescue– The latest in a series of Zombie attacks in North America and now China, this Chinese beast is seen in a train eating his victim alive. Most appalling is the crowd of onlookers who witness and capture the event yet do not go to the victims rescue. The other episode we reported on July 2nd in China: Zombie Apocalypse Hits China: Cannibal Bus Driver Attacks, Eats Womans Face on Camera

Over 8 episodes of zombie attacks have been reported, many were realized to have nothing to do with bath salts, the usual-suspect agent. People have eaten dog ears, stabbed themselves…here’s a rundown of some from our earlier article: Zombie Apocalypse: Hackensack, New Jersey man stabbed himself and threw intestines at officers

So what is going on? In any case, please review the CDC website ‘Zombie apocalypse’ preparedness page. Better to be ready. Yes, the United States Center for Disease Control actually do have that. Here: CDC: Preparedness 101: Zombie Apocalypse