NewsRescue– It’s been barely 2 weeks, the naked guy allegedly on bath salts chewed up a homeless guys face in Florida, a naked woman was seen running the streets in New York, strangling her child and her dog. She was also combative to the arresting police.

The cops and main stream media have quickly blamed ‘bath salts’, but do ‘bath salts’ even exist? Or it’s just the ‘big foot’, blamed for all odd events to keep the masses at ease?

Update: Naked Zombie woman killed by Police taser (most Zombies have been killed by police)

Following the Tuesday night incident, Munnsville mom Pamela McCarthy later died at a hospital after going into cardiac arrest from the effects of the Tasing, reported ABC affiliate WSYR-TV in Syracuse.

Officials said they encountered a “violently combative” suspect and were initially unable to handcuff her.

The child’s father, Jason Williams, talks to reporters in front of the home of Pamela McCarthy, an upstate New York woman who stripped all of her clothes off and was allegedly assaulting her child in front of her home.

“She really was not coherent to what was occurring around her,” New York State Police Capt. Rodney Campbell told reporters Wednesday. “She was not speaking clearly.”

McCarthy, 35, appeared to be high on the synthetic drug linked to a spate of horrific crimes in recent weeks, cops said.

This was not the first time troopers had to respond to calls at the house. They allegedly caught McCarthy under the influence of bath salts multiple times, Campbell said.

On Tuesday, officers first tried using pepper spray to no effect and were forced to Taser the woman, Campbell said. It took two men, a trooper and a fire fighter to finally cuff her, he added.

Neighbors described chaos in the moments preceding McCarthy’s confrontation with the police.

“We heard growling … and a kid crying so we went outside and opened up the door,” neighbor Heather Ames told YNN-TV.

“There (McCarthy) was, lying on the ground holding her 3-year-old kid in her arms and just beating him.”

Ames said she attempted to intervene and tried to wrestle McCarthy off the child.

Jason Williams, the boy’s father, rescued him while McCarthy took off after Ames, she added.

“She grabbed me. She was swinging her arms. I thought she was going to hit me,” Ames told YNN. “She scratched me in the face, then she grabbed my hair.”

David Bridge, another neighbor, told The Syracuse Post-Standard that he saw McCarthy “hit concrete after falling down a flight of stairs and got up like nothing happened.”

Once the boy was taken from McCarthy, she began stripping off her clothes and threatening passersby, reported WSTM-TV in Syracuse.

She then ran inside her home, grabbed her pet pit bull and fell down the stairs again, injuring the dog as troopers arrived on scene, according to reports.

“She needs help,” Williams told YNN.  Read more on this
—

Not too long ago, in May, another naked woman went shopping in a lumber store in NYC. Here’s a video on that:

And then there’s all the other crazy zombie stories of late in North America and Luka Magnotta in Canada.

So what’s really going on? 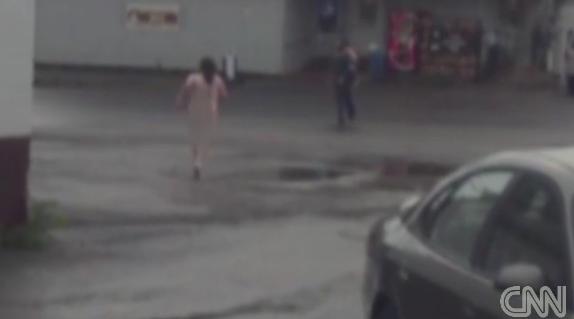 For those who missed it, here’s the rundown of some of the recent zombie episodes:

NewsRescue- Attack of the Zombies. This has been the most crazy-gross-weird week in recent history. First we had an episode of Rudy Eugene, the naked super strong cannibal in Miami, eating a homeless mans face off, then we found out about that Kenyan boy, Alexander Kinyua in Maryland, who killed and ate the heart and brain of his neighbor and friend if we may call him so. Funny, his brother and dad told on him.