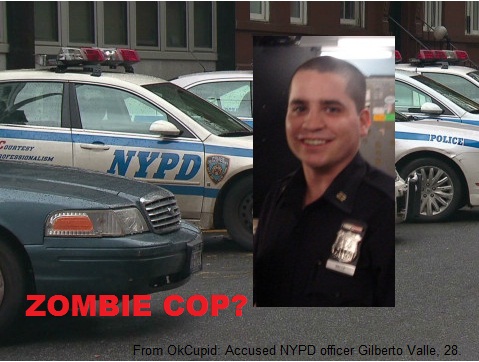 NewsRescue Editor: Scroll to bottom of CNN story for our recent article and Zombie events calendar.

CNN- Editor’s note: A New York police officer accused of conspiring to kidnap, rape, torture and cook a number of women and eat their body parts has been arrested and charged in federal court.

Here are the latest developments on this story.

[Updated at 9:11 p.m ET] A federal prosecutor and defense attorney argued in court Thursday whether a New York police officer’s sexually deviant online conversations amounted to “idle, harmless talk” or a real threat to scores of women.Prosecutor Hadassa Waxman contended that Gilberto Valle conducted online conversations “in gruesome detail,” staked out would-be victims from his police car and had taken “affirmative steps” to carry out his “operational plan.”

“This is not a fantasy,” Waxman said during the suspect’s initial court appearance. “Each name is real.”

Defense lawyer Julia Gatto called the accusations against her client “exaggerated,” saying Valle participated in one of thousands of fetish chat rooms online in which people “talk about unreal things.” What they discuss may be sexually deviant, but she stressed that no one was physically harmed by her client, who is the father of a 1-year-old child.

What made it especially troubling, the judge said, was that the suspect is a law enforcement officer and “he carried a gun.”

[Updated at 7:20 p.m. ET] Valle, 28, is being held in federal custody without bail after not entering a plea Thursday during a federal court session in Manhattan.

The New York police officer is charged with one count of conspiracy to commit kidnapping and one count of illegally accessing and getting information from the National Crime Information Center database.

“At worse, these are sexual fantasies with people he knows,” the defense attorney said.

[Updated at 5:08 p.m. ET] A New York police officer accused of conspiring to kidnap, rape, torture and cook a number of women and eat their body parts has been arrested , the U.S. Attorney’s Office in Manhattan said Thursday.

Valle, a six-year NYPD veteran, was arrested Wednesday at his home in Queens. He is accused of illegally accessing a national crime database to locate potential targets, scouting potential targets at their homes and workplaces, and exchanging e-mails and instant messages with alleged co-conspirators about plans to target women, the attorney’s office said.

“Gilberto Valle’s alleged plans to kidnap women so that they could be raped, tortured, killed, cooked, and cannibalized shock the conscience,” Manhattan U.S. Attorney Preet Bharara said. “This case is all the more disturbing when you consider Valle’s position as a New York City police officer and his sworn duty to serve and protect. Our investigation is ongoing.”

According to a law enforcement source with knowledge of the investigation, Valle – who the source says has a clean record – apparently discussed the plans with other men on a website for people who fantasize about cannibalism. Authorities have no evidence he planned to carry out any of the acts he allegedly plotted with others on the online fantasy website, a law enforcement source says.

The NYPD has suspended him without pay, a department spokeswoman said Thursday.

A criminal complaint filed in federal court says Valle was in contact with at least two women mentioned in his plans, though FBI spokesman J. Peter Donald told CNN the agency has “no information to believe Mr. Valle harmed anyone at this time.”

The investigation began in September when the FBI learned that Valle was sending e-mails and instant messages from his home computer, detailing his plans, the bureau said.

A search of his computer revealed a database of “at least 100 women and containing at least one photograph of each woman,” according to a statement from Bharara’s office. “The computer also contained personal information about some of these women – including relevant addresses, physical descriptions and photographs – and electronic communications in which Valle and co-conspirators detailed their plans.”

The FBI declined to say how it learned of Valle’s electronic communications. A law enforcement source told CNN that Valle’s estranged wife contacted authorities after finding pornography on his computer.

According to the court documents, the computer contained a document that Valle allegedly created in July, containing an action plan to cook a certain woman that authorities identify as “Victim 1.” The title, authorities say, was “Abducting and Cooking [Victim 1]: a Blueprint.”

The plan, which had information about the woman’s name, date of birth, height, weight and bra size, has a section called “Materials Needed,” in which Valle allegedly wrote:

“Car (I have it)
Chloroform (refer to website for directions)
Rope (Strongest kind to tie her up.”

The court documents say Valle also exchanged online messages with an alleged co-conspirator about planning to abduct and cook Victim 1. In one of the exchanges, according to the court documents, Valle allegedly wrote, “She does look tasty, doesn’t she?”

“You do know if we don’t waste any of her there is nearly 75 lbs of food there,” the other person replied, according to the court documents.

“Like I said this is very risky and will ruin my life if I am caught,” Valle wrote, according to the complaint. “I really need the money and I can’t take under $5,000 for [Victim 2].”

The complaint also accuses Valle of illegally getting information about a third woman, Victim 3, from the National Crime Information Center database. The name of that woman matched a name that investigators found in Valle’s alleged files of women on his home computer, the complaint says.

The women in Valle’s alleged database live in the United States and overseas, according to a law enforcement source with knowledge of the investigation. At least three of them know Valle, another law enforcement source said. Court documents show one of the alleged targets dined with Valle at a Maryland restaurant.

The 100 women are in the process of being identified, then notified by federal and local authorities.

NewsRescue– The latest in a series of Zombie attacks in North America and now China, this Chinese beast is seen in a train eating his victim alive. Most appalling is the crowd of onlookers who witness and capture the event yet do not go to the victims rescue. The other episode we reported on July 2nd in China: Zombie Apocalypse Hits China: Cannibal Bus Driver Attacks, Eats Womans Face on Camera

Over 8 episodes of zombie attacks have been reported, many were realized to have nothing to do with bath salts, the usual-suspect agent. People have eaten dog ears, stabbed themselves…here’s a rundown of some from our earlier article: Zombie Apocalypse: Hackensack, New Jersey man stabbed himself and threw intestines at officers

So what is going on? In any case, please review the CDC website ‘Zombie apocalypse’ preparedness page. Better to be ready. Yes, the United States Center for Disease Control actually do have that. Here: CDC: Preparedness 101: Zombie Apocalypse