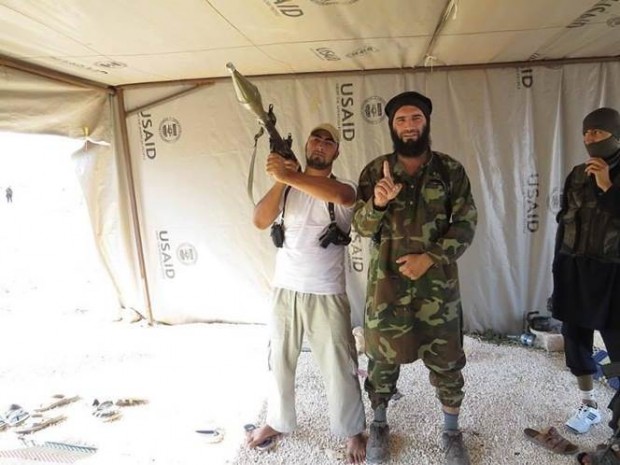 If this image is real, then it confirms the worst fears about U.S. aid to Syria falling into the hands of terrorists:

Recent images from the front line of the Syrian war suggest that terrorists are enjoying the small comforts of U.S. equipment and supplies that are meant to aide legitimate rebels, who are part of the Free Syrian Army. This appears to prove all the concerns among U.S. lawmakers and analysts that aid to the Syrian rebels could end up in the hands of Al Qaeda.

The photograph allegedly shows Islamic State of Iraq and al-Sham (ISIS) linked Commander Muhajireen Kavkaz wa Sham, along with other rebels dawning battle-gear and an RPG, inside a USAID tent.

The terror group is known inside Syria by its acronym, ISIS. It is an Al Qaeda-linked jihad organization and recently it announced a campaign of “cleansing evil” at pro-Western opposition groups inside Syria.

The authenticity and location of this photo obtained by TheBlaze, which is circulating on the web, has not been confirmed at this time. U.S. officials, however, told TheBlaze that this rebel commander is believed to be in Syria at this time.

“For the First Time I See The Saudi TV Mocking the US Administration:” Watch Video