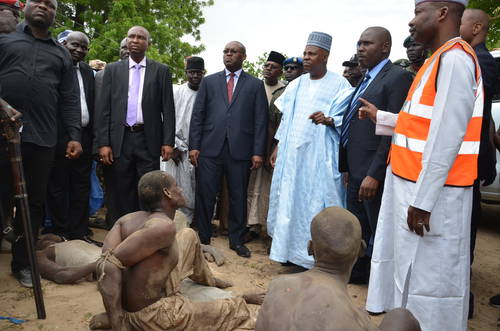 At least four Boko Haram militants have been apprehended by members of the Civilian JTF in Borno village three days after the insurgents raided some nearby villages.

The terrorists were apprehended in Malari village at Konduga Local Government area of Borno state.

The arrested Boko HAram members were presented to the state governor, Kashim Shettima while on a solidarity visit to the area. Gov. Shettima was in Malari village today to sympathize with villagers after Boko Haram attack on Monday killed 9 persons and displaced hundreds of civilians, however,the governor was surprised when suddenly some youths came down from a golf car and brought out 4 young men whose hands had been tied.

A civilian JTF leader, Nuhu Kumshise, later told SaharaReporters that one of them has been a notorious terrorists who wreaked havoc on the villagers surrounding Konduga.

”We arrested them today after his father handed over them to us, then they led us into the bush where the two remaining guys hid themselves. ”,  Kumshise said.

However, one the suspect confessed that he is members of the deadly group and he further mention the name of his leader.

Another civilian JTF Bakura ‎ Yusuf said, ”long time before now we have been told that one of the arrestees that he is the leader who used to lead attacks on us.”

During his short visit, Gov. Shettima appealed to hundreds of displaced persons that camped‎ in Malari Primary school that buses will come to convey them to Konduga and foodstuffs as well as other materials will be provided immediately by the state government.

It was gathered that 9 persons were killed and hundreds of people were rendered homeless on Monday when Boko Haram stormed five villages including Shettimari, Kammiri, Kakurami, Kalari Auwlari, Burari and Malari in Konduga local government area of the troubled northeastern state‎