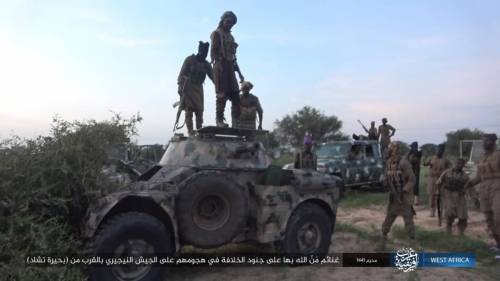 Dozens of soldiers were killed and several others wounded after a fierce attack on a military convoy in the Lake Chad region, SaharaReporter has learnt.

The Islamic State of West Africa Province (ISWAP) confirmed that nine four-wheel vehicles were captured from troops in the region after an ambush between Damasak and Gudumbali on Tuesday.

It was earlier reported that nine soldiers were killed and nearly 30 others missing in action but the figure was higher than that.

ISWAP has since claimed responsibility for the attacks saying; “Dozens of dead and wounded among the apostate Nigerian Army in the region of (Lake Chad). West African state Tuesday, 11 Muharram 1441AH, by the Grace of God.

“The caliphate soldiers ambushed a convoy of the Nigerian Army apostates between the towns of Damasak and Gudumbali and clashed with them with various types of weapons.

“Meanwhile, the Mujahideen arrived on another site of the apostates near the town Garno in the region of Lake Chad on Tuesday and clashed with them with medium and heavy weapons.”