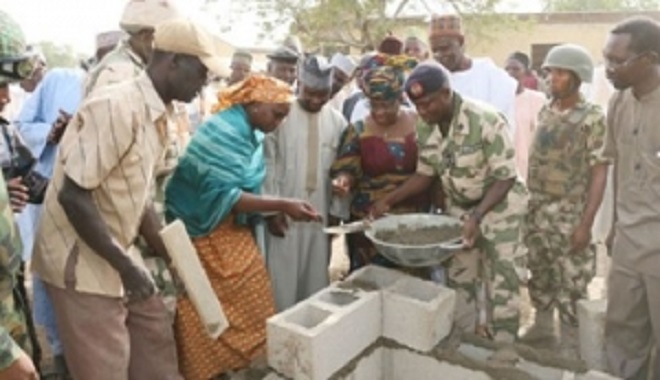 The Coordinating Minister for the Economy and Minister of Finance, Dr. Ngozi Okonjo-Iweala has laid the foundation for the rebuilding of the Government Secondary School Chibok, which was destroyed by the Boko Haram sect.

The school was destroyed when the terrorist sect abducted over 200 girls in April last year.

Over 3,000 students in Chibok have been unable to return to school since the deadly attack by Boko Haram in the community.

The minister, who represented President Goodluck Jonathan at the occasion, revealed that the school would also be remodeled.

The school is being rebuilt under the Safe School Programme under the ministry of Finance.

According to a statement from the ministry, the new school is expected to have a state of the art library, a laboratory, a computer and ICT Centre, a sports arena and a clinic.

The minister added that an observation post will be built in the school.

Also expected to be built in the school are a new staff accommodation, a principal house, a brand new administration block and new dormitories.

The school will run on solar power, and a water reservoir will be built for the new.