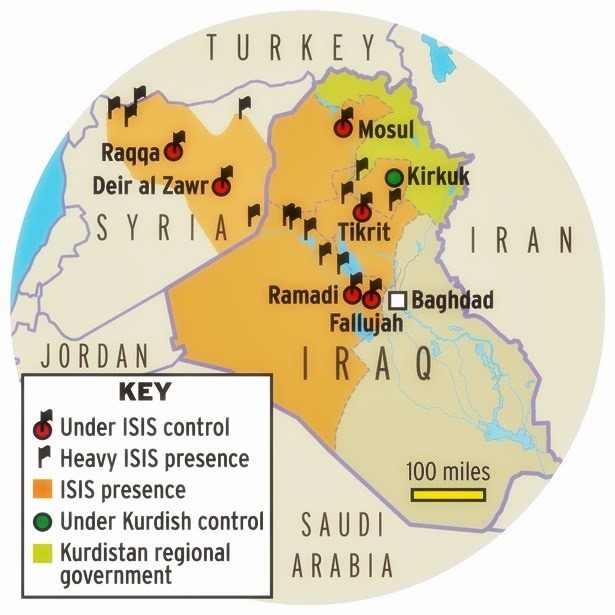 Turkey’s “incursion” into Iraq is a cold, calculated move. And once again, the name of the game is – what else? – Divide and Rule.

Turkey sent to Iraqi Kurdistan – which is part of the state of Iraq – no less than a 400-strong battalion supported by 25 M-60A3 tanks. Now the Turkish boots on the ground at Bashiqa camp, northeast of Mosul, have reportedly reached a total of around 600.

The short breakdown: this is not a “training camp”– as Ankara is spinning. It’s a full-blown, perhaps permanent, military base.

Torrents of Turkish spin swear this is only about “training” Peshmergas to fight ISIS/ISIL/Daesh.

Absolute nonsense. The crucial fact is that Ankara is terrified of the “4+1” alliance fighting Islamic State, which unites Iran, Iraqi Shiites and the Syrian Arab Army (SAA), as well as Hezbollah, with Russia.

In Syria, Ankara is virtually paralyzed, after the “stab in the back” downing of the Su-24; the Russian revelations of complicity between Turkey’s first family and stolen Syrian oil (Bilal Erdogan, a.k.a. Erdogan ‘Mini Me’, denies everything); and the Russian Air Force relentless pounding of Turkey’s fifth column Turkmen. Not to mention the deployment of S-400s and even a third-generation submarine complete with Kalibr cruise missiles.

So Ankara now switches the attention to Iraq with a “counter-alliance”, made up of Turkey; the KRG (which – illegally – sells oil to Turkey); and Sunnis in northern Iraq under the supposed leadership of the sprawling Nuceyfi tribe in Mosul.

This is textbook neo-Ottomanism in action. We should never forget that for the AKP in power in Ankara, northern Syria and northern Iraq are nothing but former Ottoman Empire provinces, an eastward extension of Turkey’s Hatay province.‘Sultan’ Erdogan’s (unstated) wet dream is to annex the whole lot.

Meanwhile, Daesh still controls Mosul. But Iraqi Sunnis – as well as the Iraqi Army – are slowly setting up an offensive.

So what Ankara wants with this military base close to Mosul is to be part of the game, coupled with two “invisible” agendas; protect their fifth-column Turkmen, wherever they are, and having more boots on the ground to fight – what else – PKK Kurds taking refuge in Iraqi Kurdistan.

‘Sultan’ Erdogan’s whole rationale is that Baghdad does not rule northern Iraq anymore (he’s got a point). But the problem, for Ankara, is that the real powers in the region may turn out to be Shiites and the PKK (that’s far-fetched; but that’s Erdogan thinking.)

‘Sultan’ Erdogan has extremely close business deals with the KRG’s ‘Mobster-in-Chief’, Massoud Barzani – as in the oil exporting deal which, illegally, bypasses Baghdad. Barzani, predictably, has no problems with Turkish military designs; after all “his” oil is paid for by the Turks.

Ankara’s move plays straight into the ultimate ‘Pipelineistan’ war; the clash between two competing gas pipelines, Qatar-Saudi Arabia-Jordan-Syria-Turkey, or Iran-Iraq-Syria, at the heart of the Syrian tragedy.

Erdogan’s paranoia that Russia may cut off gas supplies to Turkey after the downing of the Su-24 – something that Gazprom simply won’t do – has led Ankara, in desperation, to force Baghdad, mob-style, to “accept” a Qatar gas pipeline crossing Iraqi, not Syrian territory.

Needless to add this far-fetched scheme is an absolute no-go for Baghdad, which is part of the “4+1” alliance. Moreover, expect Iran – and Russia – to go no holds barred exploiting divisions among the notoriously divisive Kurds to bomb Erdogan’s elaborate plans.

Erdogan’s bottom line is quite something; he is aiming for no less than an Iraqi ‘Sunnistan’ – jointly managed by the ultra-corrupt KRG and assorted Sunnis, but under Turkish security arrangements. As if Washington and Tel-Aviv would let him get away with that.

The fact is that at least for the moment, while his game in Syria may be going down the drain, Erdogan has decided to change the subject and turbo-charge his strategy for breaking up Iraq.

And that brings up the question, once again, of how Daesh was able last year to conquer Mosul – the second city in Iraq – without a fight. And this after their notorious convoy of gleaming white Toyotas crossing the desert from Syria to Iraq managed to evade detection by the most sophisticated satellite surveillance system in the history of the Universe.

Regarding the mystery, persistent intel rumblings across the Middle East and among the “4+1” coalition are bound to turn into a volcano.

According to the rumblings, the official – Pentagon – narrative that the Iraqi Army supposed to fight Islamic State in Mosul last year got scared and simply ran away is a myth.

As we know, the Iraqi Army, trained by the Pentagon, left behind a wealth of tanks and heavy weapons duly captured by IS. And IS couldn’t be luckier in collecting this almighty ‘gift’.

The new narrative rules that the Pentagon deliberately “instructed” the Iraqi Army to run away, as a sort of tactical retreat, leaving behind all that fabulous hardware.

So what we have here is the Pentagon fully protected by plausible deniability.

And Islamic State duly weaponized as a proxy/regime change army in Syria. A perfect chaos-provoking tool aligned with the strategic objective of the ‘Empire of Chaos’ in Syria. Which, by the way, does include, in the absence of full regime change, the formation of a ‘Sunnistan’ in Syria as well.

Oh, but the Pentagon would never engage in such practices, would they?

The statements, views and opinions expressed in this column are solely those of the author and do not necessarily represent those of RT.

Pepe Escobar is an independent geopolitical analyst. He writes for RT, Sputnik and TomDispatch, and is a frequent contributor to websites and radio and TV shows ranging from the US to East Asia. He is the former roving correspondent for Asia Times Online. Born in Brazil, he’s been a foreign correspondent since 1985, and has lived in London, Paris, Milan, Los Angeles, Washington, Bangkok and Hong Kong. Even before 9/11 he specialized in covering the arc from the Middle East to Central and East Asia, with an emphasis on Big Power geopolitics and energy wars. He is the author of “Globalistan” (2007), “Red Zone Blues” (2007), “Obama does Globalistan” (2009) and “Empire of Chaos” (2014), all published by Nimble Books. His latest book is “2030”, also by Nimble Books, out in December 2015.