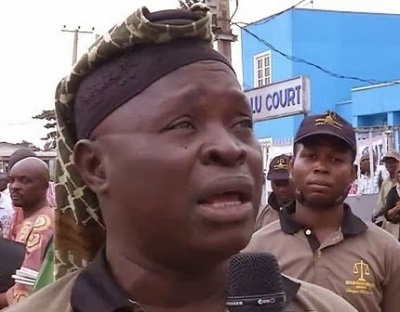 Four mosques were last week marked for demolition by the Ayodele Fayose administration in Ekiti State. The state government claimed that worshippers could contact cancer from the radioactive emission from the petrol stations where the mosques are located.

The Muslim Rights Concern (MURIC) condemns the attempt to demolish the mosques. It is an act of aggression against the peace-loving and law-abiding Muslims of the state. It is primitive, provocative and sadistic. It is an undisguised invitation to anarchy.

The state government’s excuse of exposure to cancer is lame, infantile, laughable and untenable. What of hundreds of petrol attendants who have been serving in petrol stations in Ekiti State since its inception on 1st October 1996? How many of them have had cases of cancer? How many petrol attendants in the whole of Nigeria have been exposed to radioactive emissions? Can the claim be certified by the World Health Organisation? Fayose’s public health adviser must be from hell!

But the wind has blown and we have seen the ruff of the hen. Fayose’s radioactive emission is a mere cloak for political vendetta. It has since been revealed that all the four petrol stations involved belong to Alhaji Suleman Akinbami, a chieftain of the opposition party.

Yet we cannot trust Fayose when it comes to matters affecting Muslims. He may be killing two birds with one stone. To put it more succinctly, by demolishing the four mosques, Fayose hopes to punish a political opponent and also castigate Ekiti Muslims whom he hates so much at the same time.

His antecedents bear vehement testimonies to his pathological hatred for Muslims and their religion. It will be recalled that Fayose formed an all-Christian government after assumption of office in 2015. His deputy governor, secretary to the state government, all 14 commissioners, all 26 permanent secretaries are Christians.

Known for constantly running diarrhea of the mouth, Fayose accused President Muhammadu Buhari of Islamising Nigeria just because the latter visited Saudi Arabia in February 2016. But he did not see any Christianisation agendum when his principal, ex-President Goodluck Jonathan was shuttling between Abuja and Tel Aviv every fortnight. His open bigotry and untethered hatred for Muslims makes him the governor with the worst record of Christian-Muslim relations in the whole wide world.

Drunk with absolute power which corrupts absolutely, Fayose has rebuffed the request of leaders of the Ekiti Muslim community to meet him over the mosques marked for demolition. Consequently, the Muslim leaders have suspended today’s Jum’ah prayer in all the four mosques affected. Thus Fayose will be remembered as the Christian dictator and fanatical chief executive who stopped Muslims of Ekiti State from worshipping their Creator.

MURIC charges Muslims in the state to repose their confidence in Allah who is their Supreme Creator and the Creator of Fayose and other tyrants of the world. It is decreed that Fayose will go one day but Almighty Allah will be there forever. Fayose’s power will melt away one day like ice cream in the burning desert sun. “All that is on earth will perish. Only the face of your Lord will abide forever…” (Glorious Qur’an 55:26 – 27).

Fayose’s power is ephemeral. He will soon become an ‘ex-this and ex-that’. We urge the Imams in Ekiti to magnanimously visit Fayose in Kirikiri after his tenure as governor when he eventually starts to account for his abuse of power while in office. We urge Ekiti Muslims to resist Fayose’s illegal attempt to destroy those mosques. They must go to court, get a restraining order and continue to pray there.

Where are those who claim that Christians are persecuted in the North? The tragedy of the Nigerian nation lies in the hypocrisy of the elite class and the collusion of the media in the South-West axis. The whole world can see how a Christian governor is persecuting Muslims but Nigeria’s social critics have maintained an unusual silence. Where are the Soyinkas and the Falanas? These people see nothing wrong so long as it is Christians who are perpetrating evil. Oh God, what have we done? Fayose, Fayose, Fayose, how many times did we call you? Why persecuteth thou Muslims?

Muslims may be left with no option than to make Ekiti ungovernable for Fayose if he goes ahead to demolish those mosques. Freedom of worship is enshrined in Nigeria’s constitution and civil disobedience is the inalienable right of a persecuted people. Those who make it impossible for us to worship freely are guilty of a crime. Every patriotic citizen has the obligation to disobey illegal, unlawful and unconstitutional orders. We will resist this oppression if the system will do nothing about it.

In conclusion, we call on well-meaning citizens of Ekiti State to call this ravaging governor to order. He cannot trample on Allah-Given fundamental rights of Muslims and expect them to put their tails between their legs like frightened dogs. Already, Muslims in the state embarked on a peaceful demonstration two days ago. We haven’t seen anything yet. We should do everything possible to prevent this crisis from snowballing into a national mayhem. Those who know Fayose’s first name should call him to order now.