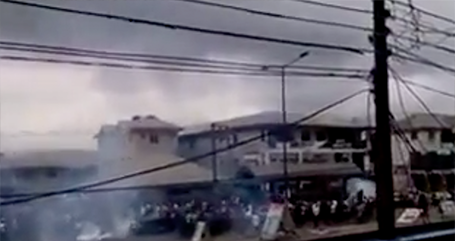 Enugu – The 82 Division of the Nigerian Army has warned agitators for Biafra that they are now crossing the red line and that its officers and men are battle-ready.

The Acting General Officer Commanding (GOC) the division, Brig.-Gen. Ibrahim Attahiru, told newsmen in Enugu that the army would not fold its hands while such persons destroyed lives and property in the country.

“The warning to the agitators is to tell them that enough is enough,’’ Attahiru said, adding that it was inexcusable for troops to stand aside and watch the security situation deteriorate, leading to loss of lives or damage to peoperty.

“The Nigerian Army would like to send an unequivocal warning to all and sundry, more specifically to all those threatening and agitating for the dismemberment of the country, committing treasonable felony and arson.

“Once deployed, the Nigerian Army shall apply the rules of engagement to the letter in order for peace to prevail,’’ he said.

He noted that the agitators had recorded cases of lawlessness in Aba, Port Harcourt, Onitsha, Abakaliki and Enugu.

Attahiru said that the army took its time to adopt the present stand, saying that it was the primary duty of the police to maintain certain levels of security in the country.