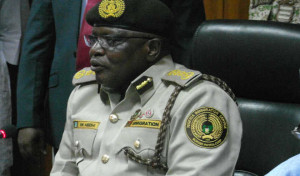 2. These categories of persons are hereby informed that these passports which were previously held by them have been revoked and should return them to the Nigeria Immigration Service Headquarters Sauka Abuja with immediate effect.

3. Failure to comply with this directive will amount to an offence under the Immigration Act 2015. Such unauthorized possession will be impounded at our control posts on arrival or departure.

I Will Name My Cabinet This Month ...