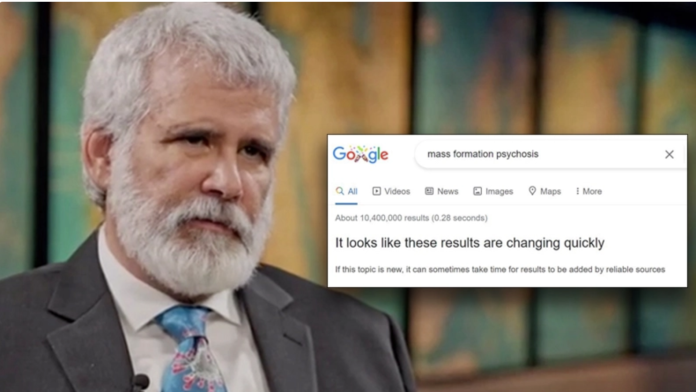 Dr. Robert Malone, the virologist who invented the mRNA technology used in the COVID injection, spoke of a fascinating phenomenon while on Joe Rogan’s podcast regarding a large swath of humanity who have been induced into semi-permanent hysteria over the establishment’s constant COVID propaganda — called “mass formation psychosis.”

Malone explained to Rogan how the German people in the 1920-30s during Adolf Hitler’s rise to power “went barking mad” from mass formation psychosis.

“When you have a society that has become decoupled from each other and has free-floating anxiety in a sense that things don’t make sense. We can’t understand it. And then their attention gets focused by a leader or series of events on one small point, just like hypnosis,” Malone said.

On Joe Rogan, Dr Robert Malone suggests we are living through a mass formation psychosis.

He explains how and why this could happen, and its effects.

He draws analogy to 1920s/30s Germany “they had a highly intelligent, highly educated population, and they went barking mad” pic.twitter.com/wZpfMsyEZZ

“They literally become hypnotized and can be literally led anywhere.”

The Malone-Rogan interview, and subsequently, the term “mass formation psychosis” went viral and began trending on social media over the New Year’s weekend, prompting search engine giant Google to step in to blunt its spread.

“It looks like these results are changing quickly,” Google states upon searching “mass formation psychosis.”

“If this topic is new, it can sometimes take time for results to be added by reliable sources.”

Dr Malone broke the algorithm and now Google is struggling to manually edit the results when you search for mass formation psychosis. Try it. Never seen this before. pic.twitter.com/kBKBGjM8bB

Turns out, the “reliable sources” Google is now referring for its top results included an obscure YouTube video of a blogger calling for Spotify to shut down Joe Rogan over his interview with Malone.

On DuckDuck it comes right up at the top pic.twitter.com/5uVRs100KB

When you search for "Mass Formation Psychosis," Google directs you towards a YouTube video attacking Dr. Robert Malone.

The conditions to set up mass formation psychosis include lack of social connectedness and sensemaking as well as large amounts of latent anxiety and passive aggression. When people are inundated with a narrative that presents a plausible “object of anxiety” and strategy for coping with it, then many individuals group together to battle the object with a collective singlemindedness. This allows people to stop focusing on their own problems, avoiding personal mental anguish. Instead, they focus all their thought and energy on this new object.

As mass formation progresses, the group becomes increasingly bonded and connected. Their field of attention is narrowed and they become unable to consider alternative points of view.  Leaders of the movement are revered, unable to do no wrong.

Left unabated, a society under the spell of mass formation will support a totalitarian governance structure capable of otherwise unthinkable atrocities in order to maintain compliance. A note: mass formation is different from group think. There are easy ways to fix group think by just bringing in dissenting voices and making sure you give them platforms.  It isn’t so easy with mass formation.  Even when the narrative falls apart, cracks in the strategy clearly aren’t solving the issue, the hypnotized crowd can’t break free of the narrative.  This is what appears to be happening now with COVID-19.  The solution for those in control of the narrative is to produce bigger and bigger lies to prop up the solution.  Those being controlled by mass formation no longer are able to use reason to break free of the group narrative.

Given the similarities between mass formation psychosis and the current state of the world under COVID tyranny, it’s unsurprising Google would take a page out of George Orwell’s “1984” and become a true Ministry of Truth by censoring and suppressing concepts themselves in real time in a bid to maintain the establishment COVID narrative.