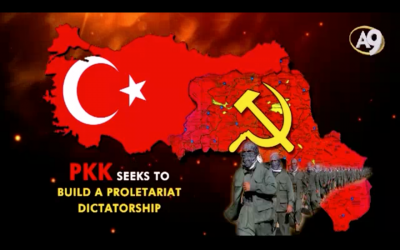 The presidential system IS A RISKY FORM OF ADMINISTRATION that PREPARES THE WAY FOR DESPOTIC REGIMES since it also BRINGS FEDERALISM with it.

It inflicts great sufferings on the peoples of regions such as the Middle East where the culture of democracy is not yet fully embedded.

Turkey is strong with its unitary structure and parliamentary democracy. It can grow stronger by preserving that structure.

A PRESIDENTIAL SYSTEM AND FEDERALISM IS A HIGHLY DANGEROUS MODEL that will gradually lead to the break-up of Turkey.

When the system has to be changed in a country, that must be done, not on the basis of individuals, but by looking 10,20, or 30 years ahead. Proper people who value the public may not always be in office, and the decision should be taken on the basis of what happens when power changes hands.

Beware! The presidential system is A MODEL BEING IMPOSED BY THE GLOBAL SECRET STATE APPARATUS TO LEAD TURKEY TO A DEAD END AND BREAK IT UP.

It is also a system that WILL BENEFIT DEEP STATES STRUCTURES AND THOSE WHO WISH TO RUN THE STATE FROM BEHIND THE SCENES.

THE PRESIDENTIAL SYSTEM IS A THREAT because:

THE PRESIDENTIAL SYSTEM PREPARES THE WAY FOR AUTHORITARIAN REGIMES

One of the first places that come to mind when the presidential system is mentioned is the USA. However, when we look at  other COUNTRIES WITH such a system, a very interesting picture emerges:

As many of these countries show, THE PRESIDENTIAL SYSTEM BRINGS WITH IT ANTI-DEMOCRATIC NORMS AND A SLIDE TOWARD AUTHORITARIAN REGIMES.

The experience of presidential systems in Latin America and Third World countries has led to dictatorships and military regimes. 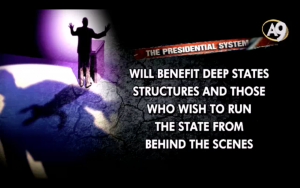 ONE OF THE MOST RISKY ASPECTS OF THE PRESIDENTIAL SYSTEM IS THAT THERE ARE ONLY VERY LIMITED LEGAL AND DEMOCRATIC MEANS OF STEPPING IN UNTIL THE INCUMBENT’S TERM OF OFFICE HAS ENDED.

A PRESIDENT elected by a bare majority and WITH WIDE-RANGING POWERS will remain in office, EVEN IF HE ADOPTS CAPRICIOUS POLICIES NOT APPROVED OF BY THE PUBLIC AND THAT FLY IN THE FACE OF REASON, LOGIC AND GOOD CONSCIENCE. It is impossible for a president’s term in office to be ended through a vote of no-confidence, there are no regulatory systems such as the tabling of questions and no legal holding to account as there are in the parliamentary system. This will result in social tensions and even fractures. Instability and upheaval will reign.

Either despotic administrations will ruthlessly oppress their people, or military interventions, supposedly in the name of protecting the people, will emerge.

THE PRESIDENTIAL SYSTEM CANNOT PREVENT COUPS; ON THE CONTRARY, IT FACILITATES THEM

Proponents of the presidential system claim that it prevents coups. In practice, however, it works exactly the other way. In regions such as the Middle East, where democracy is not fully rooted in all institutions, military coups are one commonly employed way of overthrowing a president as in the case of Egypt with its semi-presidential system.

Had Egypt had a parliamentary system, the very worst thing that would have happened is that the government would have fallen, and the losses would have been very much smaller in terms of Morsi and the then ruling party. More importantly, the people of Egypt would have avoided such profound suffering and such loss of life.

THE PRESIDENTIAL SYSTEM WILL LEAD TO FEDERALISM, AND FEDERALISM TO FRAGMENTATION

Turkey has been fighting a communist uprising in the Southeast for the last 30 years or so. The PKK’s aim is first to establish autonomy in the region, then an independent communist Kurdistan, and then to take over all of Turkey and the region through this dictatorship of the proletariat.

BEWARE! THE PRESIDENTIAL SYSTEM IS A MODEL ESPOUSED BY ÖCALAN AND THE PKK

Öcalan: “The Kurds must strive for democratic autonomy as if it were a religious observance. Democratic autonomy is more important to the Kurds than bread and water.” (http://www.gazetevatan.com/hizini-alamadi-katalan-meclisi-istedi-324201-gundem/)

The PKK DESIRES TO ESTABLISH, through an ethnocentric approach, AN AUTONOMOUS REGION IN WHICH KURDS GOVERN KURDS. The form of administration in that autonomous region will be communism. The hidden plan behind all the fine talk of DEMOCRATIC AUTONOMY and EVERYONE BEING EQUAL is A PLAN TO BREAK TURKEY UP. It means ethnically-based divisions into A KURDISH PROVINCE IN THE SOUTHEAST, A LAZ PROVINCE IN THE BLACK SEA REGION and a TURKMEN PROVINCE ON THE MEDITERRANEAN, and THAT IS UNACCEPTABLE.

Turkey is a single entity composed of Kurds, Turks, Laz people, Abkhazians, Arabs and Turkmens. You cannot build a free Turkey in which everyone is a first-class citizen irrespective of his language, ethnicity or beliefs by splitting it up into components. A Turkey in which all citizens are bound to one another with love and respect, under a single flag, and welded together with the spirit of faith will be a powerful Turkey. In other words, TURKEY WILL GROW, NOT BY BEING SPLIT UP, BUT BY MAINTAINING ITS UNITARY STRUCTURE.

THE PRESIDENTIAL SYSTEM Is Not Essential for Preventing Bureaucratic Obstacles

The idea that IT IS EASIER TO OVERCOME BUREAUCRATIC OBSTACLES WITH A PRESIDENTIAL SYSTEM DOES NOT REFLECT THE TRUTH. Fast services are of course important, but what is more important in terms of social order is for such services to be capable of regulation. WEAKENING REGULATION IN THE NAME OF HASTE WILL RESULT IN PEOPLE WITH NO CHECKS ON THEM IN DIFFERENT POSITIONS, and it will end in problems with public order and justice.

On the other hand, bureaucratic paralysis is often the case when there is a presidential system. The problem of ‘closing down the federal government’ arises in the USA, but not in countries with parliamentary systems, such as Turkey. In the USA, any disagreement between the president and the congressional opposition, any weakening of a climate of compromise, can make the federal government unable to function. This state of affairs, a significant problem even for a superpower such as the USA, will prepare the ground for even graver threats in a country such as Turkey that is still developing, both economically and democratically.

TURKEY MUST STRENGTHEN ITS UNITARY STRUCTURE AND PARLIAMENTARY SYSTEM 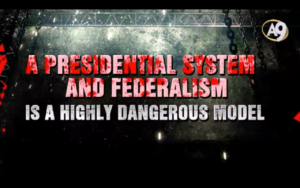 All kinds of reforms needed for Turkey to grow fast and strengthen must be carried out. However, ALL THESE REFORMS MUST BE BASED ON MAINTAINING TURKEY’S UNITARY STRUCTURE. ALL THE STEPS REQUIRED FOR TURKEY TO BECOME A FIRST-CLASS DEMOCRACY MUST ALSO BE TAKEN YET THESE STEPS MUST BE TAKEN WITH TURKEY’S INTERESTS IN MIND.

In order for the ideal of a GREAT TURKEY to become a reality, and for Turkey to be strong enough to protect all of the weak, it is essential for Turkey to BECOME A COUNTRY THAT MAINTAINS ITS UNITARY STRUCTURE. A COUNTRY THAT IS FRAGMENTED WITHIN ITSELF WILL OBVIOUSLY LACK THE STRENGTH AND WILL TO UNITE OTHER COUNTRIES.

What needs to be advocated for a world in which the Islamic world is united as brothers is NOT A PRESIDENTIAL SYSTEM that will break Turkey up into smaller components, but the idea of an ISLAMIC UNION that is a genuine defender of justice, peace, human rights, love, brotherhood, democracy and liberty.