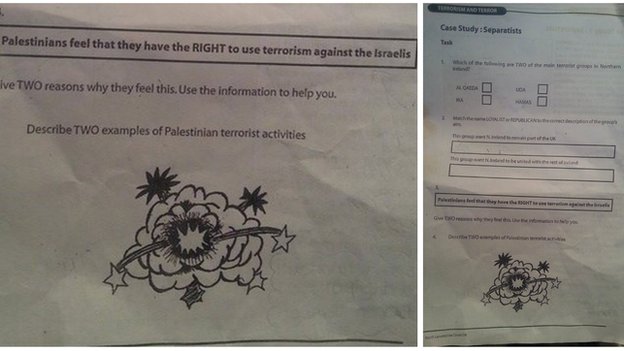 A North Lanarkshire school has apologised following complaints about a homework worksheet which labelled Palestinians as “terrorists”.

The handout, given to P7 pupils at New Stevenston Primary School, states “Palestinians feel they have the RIGHT to use terrorism against the Israelis.”

North Lanarkshire Council, which produced the worksheet, said it would ensure that it would no longer be used.

But a Palestinian group said the council had sought to “demonise” them.

Dr Essam Hijjawi, chair of the Association of Palestinian Communities in Scotland, said: “The ‘Separatists’ case study given to children as homework demonstrates a fundamentally flawed reading of history and geography. It flies in the face of countless UN resolutions and shows an ignorance which beggars belief.

“We are calling for the immediate withdrawal of all such materials from Scottish schools, a public apology to the Palestinian community in Scotland, and a meeting with education department officials in North Lanarkshire, with the leader of the council and Scotland’s minister for education.

“We ask that all materials used in schools relating to the teaching of the history of Palestine is discussed between Education Scotland and the Palestinian community.”

North Lanarkshire Council said: “The description of Palestinian people is entirely inappropriate and we apologise unreservedly for the offence caused.”

A council spokesman told the BBC that, to the best of their knowledge, this was an “isolated incident” and that the council was not aware of any other school using the material.

But he said it was in the process of contacting all schools within its area to ensure that the worksheet would no longer be used.

What did the worksheet say?

The first page of the worksheet states:

“Another example of separatist terrorism is in Israel. Palestinians who live in Israel believe that it is THEIR land which is being occupied by the Israelis. Wars between Israel and Palestinians over this always ended in their defeat and so they have turned to terrorist methods for over 30 years.

“In 1972 Palestinian terrorists held nine Israeli athletes hostage at the Olympic Games in Munich. All of the hostages were killed. Most recently, terrorist have carried out many SUICIDE BOMBINGS on buses and public places. They are respected by their own community as MARTYRS. A solution to this extremism is hard to find.”

The other side of the worksheet asks students to complete the follow questions:

Give TWO reasons why they feel this. Use the information to help you

Images of the handout began circulating on social media after the older sister of a child given the task for homework, posted a picture of the worksheet to her Facebook page.

The original image has now been shared hundreds of times. 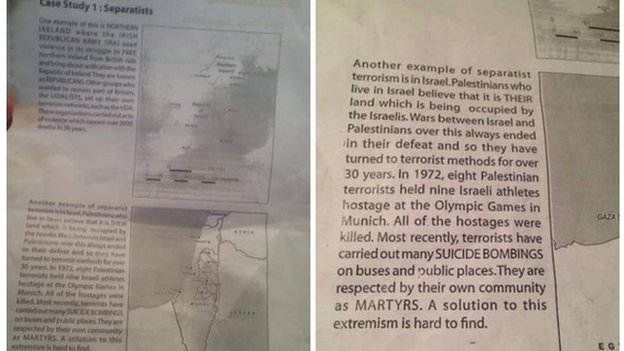 In a statement North Lanarkshire Council’s Learning and Leisure Services said: “The homework material used was taken from a teaching pack which is now obsolete. We are contacting all schools to ensure this particular material is no longer used.

“The topic is explored by pupils as part of the social studies programme ‘People, past events and societies’, and this includes conflict situations around the world.

“This topic aims to gives pupils a greater understanding of the nature of different conflicts and their regional, global and historical significance, and does not pass any judgement on the subject.”

A spokesman for the Israeli embassy in London said the homework task was “abhorrent”.

He added: “It is deeply hurtful to Israelis affected by terrorist attacks, a betrayal of Palestinians who stand up against terrorist groups, and above all an educational and moral abuse of the young students themselves.”