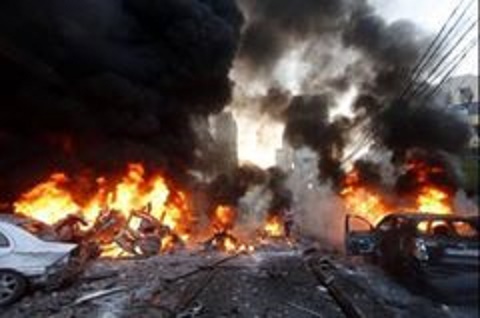 ABUJA – Two female suicide bombers were actively responsible for the twin bombings which occurred at Nyanya and Kuje towns of the Federal Capital Territory last night while a third bomber, a male dropped the bomb that had the greatest impact and killed 12 persons at the Zamfara Market in Kuje.

According to eye-witness accounts, the first female suicide bomber (a 15-year-old), alighted from an motorbike, popularly called Okada in front of the Kuje Police Station at exactly 9.25 pm Friday night and made for the station but seconds after the Okada that dropped her left, the bomb, apparently timed, exploded killing the bomber.

Fifteen minutes later, the male bomber who was also on an Okada, arrived the entrance of the Zamfara Market which incidentally is a massive market, carrying a leather bag. He approach a roasted meat (Suya) seller and asked if he could assist him with some change to enable him pay off the Okadaman.

When the Suya man told the bomber that he didn’t have the change, the bomber dropped his bag and told the roasted meat seller to help him look after it while he ask’s someone else. Minutes after the bomber left, the bomb exploded, killing and ripping off anybody that was close by.

According to the eyewitness, Abraham Gabriel, who was one of the first persons to arrive the scene, the Suya seller, a pregnant woman, a child were among the casualties.

Continuing Abraham said, initially when the first bomb went off, he thought it was an electric transformer close to the Kuje Police station that exploded but it was later discovered to be a bomb.

It was while the Police was trying to ascertain what was going on that the market bomb went off 15 minutes later with a more deafening noise.

He further disclosed that before help came from the Police, Army and NEMA, Fire Service, NSCDC for rescue efforts, he along with some persons stopped a good Samaritan who used his car to evacuate the injured to the Kuje General Hospital four times, adding that he saw two persons die on the spot before they could be rescued.

At the Nyanya end of the city, a female suicide bomber was said to have made attempt to scale the fence into the Nyanya Police station when the bomb strapped to her body exploded, killing her and one person while 21 persons were injured.