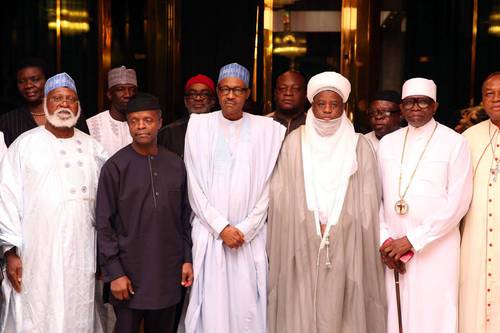 Former military head of state Lieutenant General Abdulsalam Abubakar (rtd) and other members of the National Peace Committee for the 2015 general elections were rattled by the stubborn posture and utterance of President Muhammadu Buhari during a meeting with him earlier today. Mr. Abubakar had led members of the so-called Peace Committee in yet another mission to plead with Mr. Buhari not to probe the administration of former President Goodluck Jonathan.

However, several participants at today’s meeting told SaharaReporters that the president remained obstinate and made no secret of his determination to proceed with the probe.

SaharaReporters learnt that today’s meeting was a stepped up version of previous failed attempts to sway Mr. Buhari from his determination to probe acts of corruption by officials of Mr. Jonathan’s administration. SaharaReporters had revealed that former Commonwealth Secretary General Emeka Anyaoku visited President Buhari to press the case for letting bygone be bygone shortly before the latter’s departure for an official visit to the US. Our sources had disclosed that Mr. Anyaoku had undertaken his mission to the president at the behest of Mr. Jonathan.

During Mr. Buhari’s US visit, American officials handed him dossiers that detailed billion dollar thefts perpetrated by key officials of the Jonathan administration. Members of Mr. Buhari’s delegation during his US trip disclosed that the extent of the looting left the Nigerian president angry, and strengthened his determination to unearth the widespread embezzlement of Nigeria’s funds.

Governor Adams Oshiomhole of Edo State, who was on the presidential delegation at a meeting with US Attorney General Loretta Lynch, later told Nigerians that US officials revealed that one of Mr. Jonathan’s ministers, whom he did not name, stole as much as $6 billion. Even though Mr. Oshiomhole did not disclose the name of the concerned minister, checks by SaharaReporters revealed that the rapacious former minister is Diezani Alison-Madueke who held the portfolio of Petroleum for most of Mr. Jonathan’s tenure. Ms. Alison-Madueke is currently in London.

After Mr. Buhari’s return from the US, President Jonathan stepped up maneuvers to talk him into discontinuing the probe of his administration.

A source close to the former president told SaharaReporters that Mr. Buhari’s pronouncements that his government would probe his predecessor had contributed to a major health crisis that beset former First Lady Patience Jonathan. “Madam [Mrs. Jonathan] has been suffering from serious depression,” according to the source. Ms. Alison-Madueke has also had a share of ill health apparently triggered by being the focus of global attention for symbolizing the pervasive corruption of the past administration. A source close to her in the UK stated that she collapsed in her posh apartment in London due to “exhaustion” and had to be hospitalized for two days. 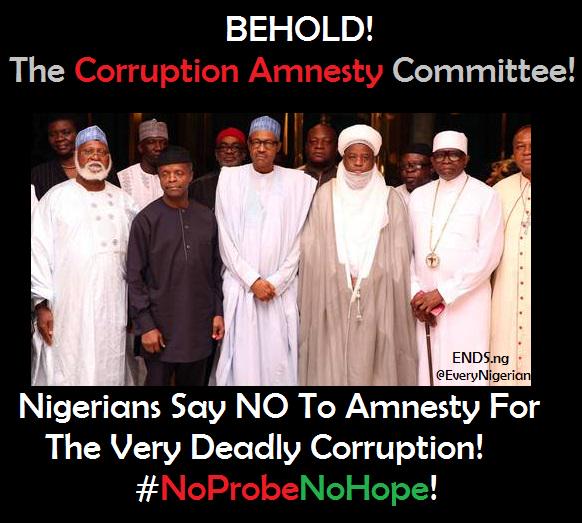 Last week, former President Jonathan reached out to former military head of state, Abdulsalam Abubakar, and urged him to arrange a one-on-one meeting with Mr. Buhari to discuss his concerns. President Buhari agreed to a secret meeting with the former president last Thursday in the dead of the night. A source familiar with the meeting told SaharaReporters that Mr. Jonathan appeared jittery at the meeting and was unable to articulate the case against probing his government. Instead, the former president reportedly asked mundane questions about how Buhari was coping with governing the country and offered to help in any way.

The meeting was over in less than 30 minutes.

Meanwhile, former President Olusegun Obasanjo was so incensed on hearing about Mr. Buhari’s meeting with Mr. Jonathan that he called at the Presidential Villa 24 hours later to meet with Mr. Buhari behind closed doors.

A source at the Presidency revealed that Mr. Obasanjo, whose record of corruption as president was equally monumental, urged Mr. Buhari to send former President Jonathan to jail.

Another source stated that Mr. Obasanjo volunteered to use his international contacts to help trace the funds stolen during Mr. Jonathan’s administration, adding that much of the funds were laundered through arms deals as well as shady oil sales and swaps.

Today, Mr. Abubakar and fellow members of the National Peace Committee first met with President Buhari in a closed-door session before appearing before the media. A member of the committee revealed that their team first told President Buhari that they had come to discuss how to “wind up” and to check if there was a new national assignment they could undertake.

The source also revealed that, even though the committee did not mention former President Jonathan by name during their interaction with Mr. Buhari, the committee members cautioned against leaving the impression that the government was targeting “anybody.” They also appealed to Mr. Buhari to tarry a little before deciding on probing anybody.

A source at the Presidency stated that Mr. Buhari was well aware of the committee’s secret mission, hence his decision to speak forthrightly in response. Among the committee’s members is a controversial President of the Christian Association of Nigeria (CAN), Ayo Oritsejafor, a loyalist of Mr. Jonathan’s. His private jet was involved in an arms deal scandal after South African authorities discovered, and confiscated, $9.3 million in cash inside the aircraft. The Jonathan administration then stated that the funds were meant for the purchase of arms to prosecute the war against Islamist insurgents, Boko Haram.

“We are also looking at properties purchased in Ghana, Dubai, UK and US by various officials of the immediate past administration,” one source disclosed.

He added that one of the biggest means of money laundering was the reckless purchase of private jets by former cohorts of Mr. Jonathan.

At the end of the meeting yesterday, President Buhari made it clear to members of the committee that his government would soon commence trial of Nigerian treasury looters.