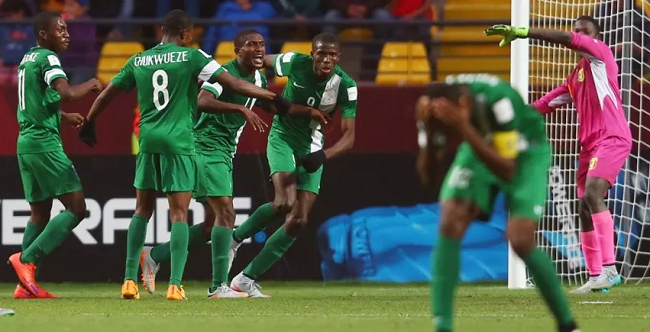 President Buhari has said that the victory of the Golden Eaglets over Mali in the final match of 2015 Under-17 FIFA World Cup tournament in Chile on Sunday clearly indicated the indomitable spirit of Nigerians was still active.

In a statement by his Special Adviser on Media and Publicity, Mr. Femi Adesina, the president congratulated the team, saying that they had made Nigerians proud.

According to him, the victory also showed that the country was making steady progress to occupy its pride of place in the world affairs.

The statement read thus: “On behalf of the Federal Government and millions of very happy and proud Nigerians, President Muhammadu Buhari congratulates the Golden Eaglets of Nigeria on their victory over Mali in the final match of this year’s Under-17 FIFA World Cup tournament in Chile.

“President Buhari applauds the exemplary zeal, determination, commitment, hard work, patriotism and soccer artistry which the youthful Golden Eaglets put on display throughout the tournament to win the championship for a record fifth time.

“The President notes with delight that the Golden Eaglets not only won the coveted Under-17 FIFA World Cup, but they are also bringing home highly-valued individual awards such as the Golden Boot won by Victor Osimhen for being the tournament’s highest goal scorer and the Golden Ball, won by the team captain, Kelechi Nwakali for being the best player.

“President Buhari believes that by their triumph in Chile, the Golden Eaglets have shown the world that the indomitable Nigerian spirit is alive and waxing stronger.

“For the President, the Golden Eaglets’ latest victory on the global stage is an affirmation of the significant progress Nigeria is now making towards positively redefining and rediscovering its potential for greatness in the comity of nations.

“President Buhari trusts that if all other Nigerians imbibe and exhibit the doggedness, determination and patriotism displayed by their youthful compatriots in Chile, Nigeria will surely make faster progress towards becoming the strong, united, peaceful, secure and prosperous nation envisioned by its people.

“The President joins other proud Nigerians in awaiting the Golden Eaglets triumphant return to a heroes’ welcome from a joyous and grateful nation”.