On October 15, the day former Head of State, Muhammadu Buhari, declared his intention to run for president in the 2015 election, news website, Sahara Reporters, activated an opinion poll asking Nigerians to indicate who they would vote for if the election were to hold that day between Mr. Buhari (as candidate of the All Progressives Congress, APC) and President Goodluck Jonathan ( as candidate of the Peoples Democratic, PDP).

His poll, which is still running on his blog, “Build Up Nigeria” posed the question: “If the Nigerian Presidential election were held today, who would you vote for between President Goodluck Jonathan and General Muhammadu Buhari?”.

Mr. Omokri’s poll began a day after Mr. Buhari declared to run, but unlike the one ran by Sahara Reporters, which has since closed, the one by Build Up Nigeria is still running.

However, the result of the poll, as at 18:32 p.m. on Saturday, showed that Mr. Buhari was also leading by a wide margin.

Three hundred and ten persons, representing 3.38 percent of the total votes, were undecided.

Below are the two poll results: 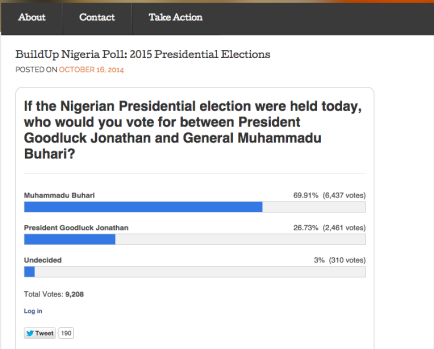 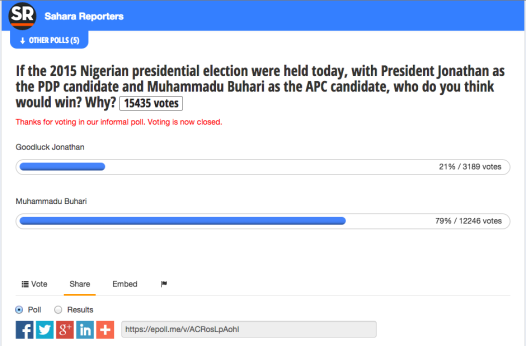