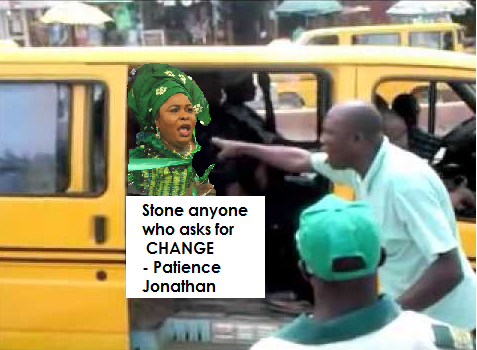 As the ruling party battles for at least a victory in a highly populated state, Rivers state has been set on fire.

Thugs have now burned an INEC office at Emouha.

The first lady, Patience Jonathan who hails from Rivers state and the PDP gubernatorial candidate, Nyesom Wike have been implicated in financing political thuggery and deadly violence in the state. The first lady is currently being investigated by the ICC for instigation of violence.

Witnesses claimed they saw Nyesom Wike shooting at them.

Youth are meanwhile protesting across the state that has been gripped with violence since before the elections yesterday, with youth throwing objects and police shooting live rounds. Youth protested that they were accredited but did not vote yesterday and were told to return today to vote; but upon returning today suddenly saw the officials reading out so-called resslts from polling booths where no one had  voted yet.

Rivers state Governor Rotimi Amaechi has called for the cancellation of elections in the state.

Yesterday Amaechi had refused to be accredited when he discovered that there were no result sheets with the officials in his ward.