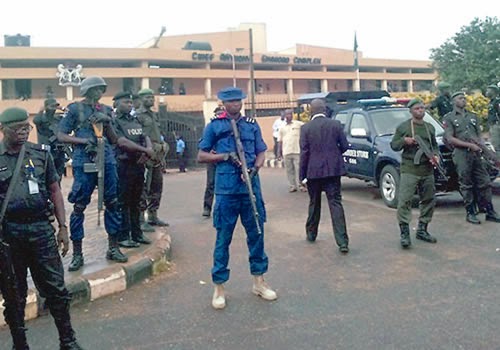 The policemen who stormed the Assembly complex at about 11am started assaulting the staff of the Assembly in their offices, ordering them out of the premises. The workers who are involved in the on going renovation of the Complex were equally chased away by the policemen.

Following the pandemonium at the Assembly complex, a visibly shocked Speaker of the House, Uyi Igbe, came out from his office to confront the policemen led by ASP Florence Joseph.

Angered by her comment, the 15 APC lawmakers challenged her to shoot them, vowing to resist any attempt by the Peoples Democratic Party (PDP) to use the police to destabilize the state.

“We will fight with the last drop of our blood, the presidency and the Inspector General of Police can kill all of us, we are prepared to die”, they echoed to the policemen.

According to Vanguard, as the argument between the APC lawmakers and the Police went on, the impeached Deputy Speaker of the House, Festus Ebea, said there was no need for the renovation, saying that it was an attempt by the APC to stop them from sitting.

The Assembly complex has been taken over by orders from above.