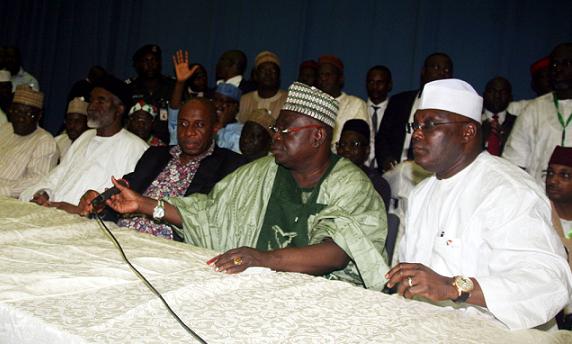 LAGOS — The Bamanga Tukur-led faction of the Peoples Democratic Party, PDP was on the precipice, yesterday, after 58 members of the House of Representatives publicly switched sides to the Kawu Baraje New PDP (nPDP). Four more senators have also joined the earlier 22 senators on the side of Baraje, swelling the number to 26 pro-nPDP senators.

However at press time last night, President Goodluck Jonathan was said to have begun a meeting with 10 governors of the PDP.

Besides, the Baraje faction also moved yesterday for the de-registration of the Tukur faction by the Independent National Electoral Commission, INEC.

The Baraje faction in court seeking to legitimize itself also claimed that Tukur was not a valid member of the party and as such not in position to lead the ruling party.

The sense of panic among Presidency and party officials was exacerbated after the chairman of the Board of Trustees, BoT, Chief Tony Anenih announced the postponement till next Tuesday, of the scheduled peace parley between the aggrieved seven governors and President Goodluck Jonathan. The anxiety was also not helped by comments by Anenih that “some of the governors have genuine grievances.”

The six governors: Aliyu Wamakko (Sokoto), Sule Lamido, (Jigawa), Murtala Nyako (Adamawa), Rabiu Kwankwaso (Kano), Babangida Aliyu (Niger) and Ahmed Abdulfatah (Kwara) were joined in the walkout by former Vice-President Atiku Abubakar. They were to reconnect with Governor Chibuike Amaechi of Rivers State who was three months ago suspended from the party by the Tukur leadership and proclaim the establishment of the Baraje faction.

The peace parley summoned by the president with 16 governors in attendance last Sunday which was expected to resume yesterday failed to hold.

Anenih who was at the head of the peace efforts on behalf of the president said the postponement was to give room for the two parties to further consult on the issues earlier raised at the preliminary meeting.

Anenih, nevertheless, said that some of the governors have genuine grievances.

“I believe some of them have genuine grievances; but I have hope that, once the grievances are addressed, they will come back.  I am happy that the PDP has an internal mechanism for effective conflict resolution, and at the end of the day, the problems will be addressed and the PDP will come out of the crisis stronger,” Anenih stated.

Anenih said that the peace talks will continue next Tuesday after some party elders would have first met to discuss the issues raised at the first meeting.

He said: “Part of the wider consultations is the meeting of selected party leaders with Chief Olusegun Obasanjo on Friday morning and thereafter, we will meet with the governors on Tuesday, next week.”

Anenih, however, did not articulate the grievances of the governors though several issues have surfaced in the media. Among them are that Tukur should be removed from office, the return of the party structure in the states to the governors, that the president should commit himself to serving only one term in office and the restoration of Amaechi’s full membership of the party.

There were also assertions that part of the reasons for the failure of the meeting to hold yesterday was the President’s reluctance to meet the alleged request by the governors that the Economic and Financial Crimes Commission, EFCC, should be stopped from further investigations of the states.

It was being alleged, yesterday, that the President’s failure to make a commitment on the requests by the governors may have influenced them into seeking further consultations and thus the failure to hold the meeting as scheduled, yesterday.

The claim of persecution of the governors also reverberated in a statement issued by the 58 members of the House of Representatives in which they cautioned the security agencies to work within the ambit of the law in their dealings with defectors from the Tukur-led PDP.

The 58 members of the House of Representatives in a statement switching loyalty to the Baraje faction, yesterday, said the members of the faction doing so are patriots.

In the statement issued in Abuja, the members said they also strongly condemned attempts by some agents of the Federal Government to use state apparatus to witch-hunt some of the patriots for taking the step.

“We, the members of the House of Representatives under the platform of the New PDP, hereby congratulate our leaders on the emergence of the new party.

“Although a sizeable number of our members who could not append their signatures because of their unavailability in the country will do so immediately on arrival, we the under-signed salute and appreciate the courage, sacrifice, resilience and patriotism of our leaders namely: former Vice President Atiku Abubakar and the governors — Rabiu Musa Kwankwaso (Kano); Aliyu Wamakko, (Sokoto); Murtala Nyako (Adamawa); Sule Lamido (Jigawa); Mu’Azu Babangida Aliyu (Niger); Abdul Fatah Ahmed (Kwara), and Chibuike Amaechi (Rivers), and other well-meaning and eminent Nigerians for leading the way for the emergence of the New PDP.

“We are also using this opportunity to condemn in strong terms attempts by some agents of the Federal Government to use state apparatus to witch-hunt some of these patriots for taking this bold and courageous step.

“As members of the House of Representatives, we call on the security agencies and other anti-graft bodies to be professional in their activities and not allow themselves to be used by anybody no matter how highly placed for their political ambitions. Remember how you want history to judge your tenures.

“We won’t hesitate, however, to use all instruments of law within our powers as provided by the Constitution of the Federal Republic of Nigeria, 1999 (as amended), to stop this and bring anybody found wanting to book.

“We wish to state that by this statement, we pledge our loyalty and support to the New PDP under the able chairmanship of Alhaji Abubakar Kawu Baraje, the Deputy Chairman, Dr Sam Sam Jaja, National secretary, Prince Olagunsoye Oyinola and other members of the National Executive Committee.

“We congratulate them and wish them the very best as they steer the affairs of our party to provide level-playing field for all Nigerians.”

Members who signed the statement include:

Meanwhile, court papers filed by the Baraje faction seeking recognition as the de facto leadership of the party obtained by Vanguard yesterday indicate that the faction is INEC to deregister the Tukur faction for allegedly infringing Section 222 (d) of the Constitution.

The provision requires any political party making changes to its constitution to notify INEC at least 30 days before the amendments.

222. No association by whatever name called shall function as a party, unless

(d) any alteration in its registered constitution is also registered in the principal office of the Independent National Electoral Commission within thirty days of the making of such alteration;

In its statement of claims in its case against the Tukur leadership filed at an Ikeja, Lagos High Court, the Baraje faction deposed thus:

“Evidence has surfaced to prove that strange clauses which were not part of the proposed amendments were inserted into the original produced version of the 2012 constitution and those alterations were not approved by the party convention and the National Executive Committee thereby making the document a forged document which is invalid.

“The forged 2012 constitution was not equally filled before INEC as required by the constitution, thereby making the PDP constitution upon which the 2013 convention was held an invalid document and the outcome of that convention invalid, as it was held with no valid constitution.

“The proof of these evidence can be seen in the approved memo by the PDP NEC upon which the amendment was done in the 2012 and the original version of the PDP constitution filed with INEC will as well prove these violations.”

The Baraje faction is also claiming that Tukur is not a valid member of the party and as such not in a position to hold the office of chairman or preside over the national convention of the party as he did last Saturday. According to the claims, Tukur was expelled from the party in 2001 and after that was neither formally readmitted nor given a waiver to allow him hold office in the party.

“Exactly on the 31 May, 2001, the PDP NEC after its meeting held in Abuja expelled eight members of the PDP in accordance with the PDP constitution which gives the NEC the powers to discipline NEC members who breaches the constitution.

“They were expelled after NEC considered and adopted the report of the Iro Dan Musa-led PDP Disciplinary Committee. Alhaji Bamanga Tukur, Don Etiebet, Aishek Jarma, Ume-Ezeoke, Emmanuel Ibeshi, Harry Marshal and Gbenga Olawepo were the ones expelled from the PDP.

“Note that Article 10(b) iii of the PDP 2009 constitution and Article 8(17) of the 2012 amended constitution which holds that any member of the party who loses his membership by expulsion can only return to the party with the approval of the party executive at his ward, state and national levels, who shall give him a waiver.

“Since the expulsion of Bamanga Tukur in 2001, he has not complied with the above requirements of the PDP constitution, meaning that his purported participation at the 2012 convention where he was elected was a fraud and invalid, as he is not yet a member of the party.”

The faction is also asking for last Saturday’s convention to be declared illegal on the claim that illegal delegates voted in the convention, a claim compounded by another claim that the Tukur executive failed to give the requisite 21 days notice to INEC for the conduct of a national convention.

The claims filed by the Baraje faction were also made at a press conference in Abuja yesterday by the PDP Stakeholders Forum. Addressing journalists in Abuja yesterday, Chairman, of the forum, Ikenga Imo Ugochinyere said he was already heading to the court to challenge the validity of the last convention just as he also accused Tukur of serially violating PDP constitution and usurping the powers of the National Executive Committee.

He also reiterated the claim that Tukur is not a valid member of the PDP.