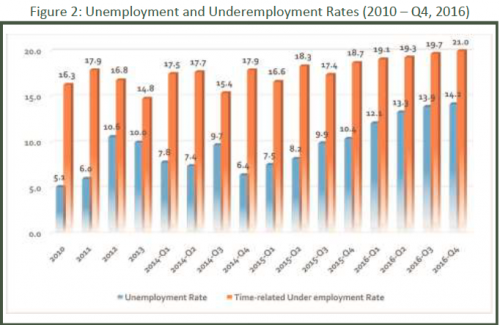 The National Bureau of Statistics (NBS) said the unemployment rate in the country rose from 13.9 per cent in the 3rd quarter to 14.2 per cent in the 4th quarter of 2016.

The NBS made this known in the “Unemployment/Under-employment Report for 4th Quarter of 2016″ made available on the bureau’s website on Tuesday in Abuja.

According to the bureau, the percentage increase in both the 2nd and 1st quarter of 2016 were slightly lower at 13.4 per cent and 12.1 per cent, respectively. It showed that 26.06 million persons were unemployed in 2nd quarter and while 24.5 million were unemployed in the 1st quarter in the year under review.

The report however showed that the underemployed in the labour force in 2016 in the 3rd quarter was 15.9 million persons or 19.7 per cent, while the 4th quarter was 17.03 million or 21.0 per cent. The report said that it therefore showed an increase of 1.3 percentage points between the 3rd and the 4th quarters of 2016, a steady rise in the rate since 3rd quarter of the year.

The bureau said that keeping with the recent trend in the labour market, unemployment and underemployment continued to be highest for persons aged between ages of 15 to 34.

According to the bureau, the age bracket represents the youth population in the country. It said that a breakdown into age groups showed that unemployment rate was highest for those within the ages of 15 to 24, while the underemployment rate for the same age group increased to 36.5 per cent in 4th quarter of 2016.

In addition, the bureau stated that unemployment and underemployment were higher for women than men in the 4th quarter of 2016.

It said that during the 4th quarter, 16.3 per cent of women in the labour force were those between 15 and 65 – willing, able and actively working or searching for work were unemployed.