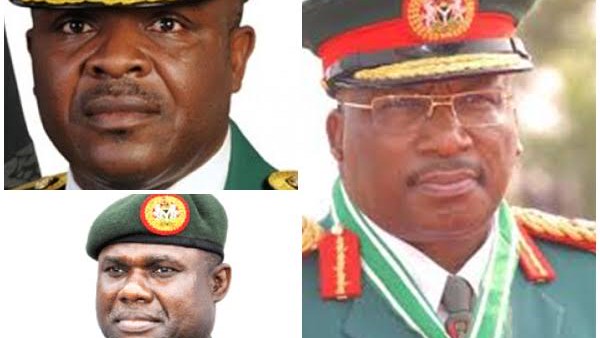 The Presidential Committee on Audit of Defence Equipment Procurement (CADEP) has traced about N2billion, meant for the purchase of vehicles for the Nigerian Army, to the accounts of five children of a former Chief of Army Staff.

The accounts were said to have been frozen as at the time of filing this report.

Also, the panel discovered that about 42 units of Armoured Personnel Carrier (APC) rejected by Iraq were resold to Nigeria to fight Boko Haram insurgents.

It said the poor equipment accounted for the loss of lives and soldiers in the North-East.

The panel’s findings are contained in a brief which was  obtained by The Nation.

The outcome of the panel’s investigation suggested that the children of the ex-Chief of Army Staff allegedly used two companies for the deal.

The panel said: “The committee reviewed the procurement carried out by Chok Ventures Ltd and Integrated Equipment Services Ltd, two companies that shared the same registered office, had one name as common controlling shareholder and sole or mandatory signatory to the various banks accounts of the companies.

“The committee further established that between March 2011 and December 2013, the two companies exclusively procured various types of Toyota and Mitsubishi vehicles worth over N2, 000,000,000.00 for the Nigerian Army without any competitive bidding.

“Most of the contracts awarded to the companies were also split, awarded on the same date or within a short space of time at costs and mobilization higher than the prescribed thresholds.

“For instance, on February 13 and 15, the two companies were awarded contracts worth N260, 000.000.00 and N315, 000,000.00 respectively for supplies of various vehicles. The Nigerian Army could not justify the exclusive selection of these vendors against other renowned distributors of same brands of vehicles procured.

“More seriously, the committee found no credible evidence of delivery of the vehicles by the two companies as there were no receipt vouchers, but only unauthenticated delivery notes, invoices and waybills that were purportedly used for the deliveries.

“Nevertheless, the vendors were fully paid based on job completion certificate authenticated by the then Chief of Logistics, Maj Gen D.D. Kitchener (rtd). The payments were also made without deduction of Withholding Tax (WHT). Furthermore, analyses of the various bank accounts of the two companies showed transfers to individuals , some of who are believed to be children of the army chief.

“Thus, the committee recommends further investigation to determine delivery of the vehicles and relationship of funds beneficiaries with the former COAS and the two companies. Furthermore, the panel said that Lt Gen O. A. Ihejirika (rtd), Maj Gen D. D. Kitchener (rtd), Col A. M. Inuwa and Mr Chinedu Onyekwere should be held accountable for the issues arising out of the contracts.”

The panel observed that the award of contracts in the Nigerian Army was fraught with irregularities.

“In November 2014, the ONSA awarded contract to Conella Services Limited for procurement of 72 various arms and ammunition that included MRAP vehicles, Mi-17 helicopter at the cost of $125,179,299.10.

However, the Nigerian Army denied receipt of any procurement from Conella Services Ltd.

“Similarly, the committee tried in vain to reach officials of the company to confirm execution of the contract. There is, therefore, the need for further investigation of Conella Services Ltd.

“The committee observed that SEI and its two associated companies, APC Axial Ltd and HK-Sawki Nig Ltd, were incorporated in May 2014 with two Nigerien brothers, Hima Aboubakar and Ousmane Hima Massy as the only directors.

“Between May 2014 and March 2015, the ONSA mandated CBN to release various sums totaling $386,954,000.00 to SEI and the two associated companies for ‘procurement of technical equipment’, without tying the money to particular items of procurement.

“Thus, the allotment of the funds was left at the discretion of the vendor without input or consultation with ONSA or the Nigerian Army.

“Furthermore, some of the funds transferred preceded the formalization of SEI contracts with the Nigerian Army. There was also no evidence of any contract to justify the payments made by ONSA to the SEI associate companies. Consequently, it had been difficult for the ONSA, the Nigerian Army and SEI to reconcile the accounts vis-a-vis the equipment delivered.”

The panel also uncovered that 42 units of Armoured Personnel Carrier(APC) which were rejected by Iraq were later sold to Nigeria to fight Boko Haram insurgents.

It claimed that some of the APCs were either expired or unsuitable leading to loss of lives.

It added: “The committee observed that one of the new equipment SEI procured for the Nigerian Army from Ukraine was BTR-4E APC.”

However, according to the Ukraine’s state enterprise, Lviv Armour Repair Plant, the designers of the equipment, “some of the products sold to Nigeria in 2014 were actually among 42 units designed for Iraq which subsequently rejected them due to poor performance rating”.

“The Nigerian Army did not also undertake the mandatory pre-shipment inspections provided for in the contract agreements. Instead, the NA deployed an infantry officer, who lacked the technical knowledge to assess the capabilities and shortcomings of the equipment, to oversee the shipment of the items for the Nigerian Army from Ukraine.

“Additionally, the two-week training availed the technicians and operators was inadequate for them to comprehend the technical workings of the newly introduced equipment.

“The committee’s interactions with the field operators revealed that although the platforms and ammunition procured by SEI were deployed for the NE operations, some of them were aged or expired, lacked spares and prone to breakdown without immediate recovery equipment.

“Therefore, failure to carry out pre-shipment inspection and inadequate training resulted in procurement of some unreliable equipment that reduced the capacity of the Nigerian Army in the North East operations and resulted in the loss of lives and equipment.”

On some payments to SEI on T-72 Tanks, the panel said the company made about $93,000,000.00 profit without paying the mandatory 5 per cent Withholding Tax(WHT).

It said: “SEI submitted a document to the committee reconciling the items it delivered to the Nigerian Army vis-a-vis the payments made to it by ONSA.”