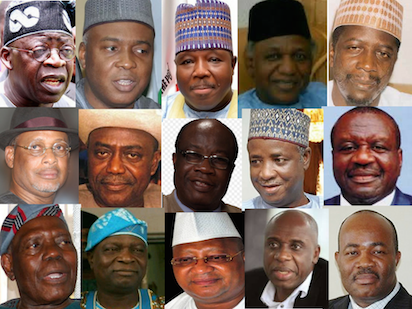 Former governors are exerting pressure on the finances of state governments with pension payments and other entitlements draining billions of naira every year from developmental funds for the states.

Over N37.367 billion was, according to Vanguard findings, expended on servicing 47 former governors from 21 states in pension payments and provision of houses, staff, and vehicles replaceable between three and four years.

Former governors of Bauchi State are paid the sum of N1.201,634.28 billion per annum, while former deputy governors, according to Vanguard findings, earn N1,131,345.96 billion per annum. The amount is apparently based on the monetized benefits that include personnel, vehicles, houses and other allowances.

The payments are in many cases besides provisions for medical expenses for the former chief executives which run into hundreds of millions per ex-chief executive.

The pension payments and other entitlements drawn by the governors are irrespective of the prescription of the Revenue Mobilisation, Allocation, and Fiscal Commission, RMAFC providing 300 percent severance for the governors as stated in the Certain Political Office Holders and Judicial Officers Remuneration Act.

Under that act, former governors are like lawmakers entitled to 300% of their basic salary of N2, 223,705 amounting to N6,671,115 as severance pay. Some ex-governors Most of the provisions stipulate the provision of vehicles renewable every three to four years, accommodation at the state capital and sometimes in Abuja; 30-day-paid  holiday outside the country and free medical treatment for the former governors and their immediate family members. However, a few other states including Akwa Ibom, Yobe, Gombe, Lagos, Kano, Rivers, Kwara, and Sokoto, have earmarked outlandish cash transfers to the former governors.

The former governor/ deputy receive 200 million and 150 million respectively, two vehicles replaceable every four years, two drivers, free medical for the former governors/ deputies and their immediate families in Nigeria or abroad. Senator Abba Ibrahim, who served three different times as governor of the state is the only one enjoying the entitlement being the only former governor alive. The only other person to have shared the governor’s office with him were the late Senator Mamman Ali who died in office and the incumbent. Other recommendations besides the cash payments, some states, including Cross River, Kwara, Lagos, Rivers, Bayelsa, Delta, Ebonyi, Kano, Zamfara and Sokoto States have also recommended the payment of the basic salaries of the incumbent governors as yearly pension payments to their former governors.

The version of the governors’ pension law in Kwara State which came into effect in 2010 states that the former governor shall be entitled to two cars and a security car, replaceable every three years, a well-furnished 5-bedroom duplex, furniture allowance of 300 per cent of his salary; five personal staff, three DSS operatives, free medical care for the governor and the deputy, 30 per cent of salary for car maintenance, 20 percent for utility, 10 percent for entertainment, 10 percent for house maintenance.

Chief Emeka Wogu, a former minister who also represented Abia State in the Revenue Mobilisation, Allocation and Fiscal Commission, RMAFC and was chairman of the RMAFC committee which prescribed the severance payments told Vanguard that the pension laws prescribed by the states if inconsistent with the law as prescribed by the commission, would be deemed illegal.

Wogu, also a lawyer and public policy expert, however, drew back from declaring the payments to the former governors as illegal. “Anything outside the law that was recommended by the Revenue Mobilisation, Allocation, and Fiscal Commission, and not in consonance with the law, and where it is already prescribed by states houses of assembly, that means that such laws are in conflict with the federal law.” Ahead of the 2015 presidential election, General Muhammadu Buhari as the candidate of the All Progressives Congress, APC, had promised to use moral suasion to compel the governors to amend the provisions of the pension law on the ground that they were unsustainable.