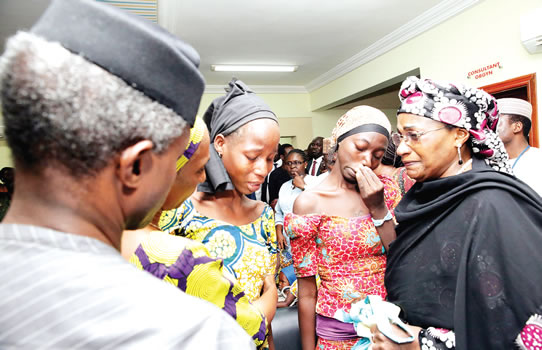 When will the 21 Chibok girls released in October last year go back to school? When will they be fully reunited with their parents? These are some of the questions agitating the minds of their parents and members of the Chibok Community in Abuja.

Deprived of having unfettered access to the girls, the community has now alleged that the girls are camped in a place where aside being taught how to bake cake, all they do is to clap, sing and dance.

Chairman of the community in Abuja, Hosea Tsambido who stated these, also demanded a further probe of the 2014 Chibok girls abduction.

“The 21 girls, plus the three that were earlier recovered, making 24, are only there clapping and being trained how to bake cake. They are doing nothing, but I am happy that even the girls have started to protest now because when some august visitors move to go there, the handlers of school the girls on how to talk but is now changing. When such guests come, the girls would protest saying they are tired and want to leave there,” he told Saturday Vanguard.

The community also asked President Muhammadu Buhari to honour his January 2016 promise to institute another probe panel on the abductions.

Former President Goodluck Jonathan had in 2014 set up the Gen. Ibrahim Sabo-led panel to probe the abductions, report of which the Federal Government has refused to make public.

“We have been pressuring the current administration to fulfil her promise of setting up its own probe committee. Since January 2016 when a statement was issued by the presidency that such a committee would be set up, nothing has been heard. It just died down. Left to me, we shall never relent until that committee is set up.

Buhari, had since January 14, 2016 ordered the National Security Adviser, NSA, General Babagana Munguno to set up a panel to investigate the abduction of the girls from Government Secondary in Chibok, Borno State in April 2014. A statement by the Senior Special Assistant to the President on Media and Publicity, Mallam Garba Shehu had stated that the “investigation will seek to, among other things, unravel the remote and immediate circumstances leading the kidnap of the girls by Boko Haram terrorists as well as the other events, actions and in actions that followed the incident.”

On her part the Bring Back Our Girls, BBOG Movement also advised the Borno State Governor, Ibrahim Shettima to get acquainted with figures, saying, “it is quite unfortunate that the governor does not know the exact count and this keeps happening because as citizens, some of us do not ask questions.” Up till yesterday (Wednesday), the Borno governor was still saying 114 girls have been rescued.”